I was searching the internet a while ago for an interesting flatcar to model and decided to do a green Burlington Northern one. I came across a Tangent Scale Models advertisement for BN #610196 flatcar with "crooked lettering." My guess is that the BN stencils for the lettering were just a little too wide to fit between the flatcar stake pockets and instead of modifying the stencil the car workers just tilted it a little bit to make everything fit. It looks a bit silly, but I liked it. I also appreciated that it didn't have a lot of extra lettering on the sides. So, even though my car is based on a Thrall-built car and this was a General Steel Castings I went with it anyway. The car was decaled in much the same way as my other car, but this time I intentionally made it look like the picture which meant things weren't on the level (see what I did there?). In fact, I think I over-compensated for the slant. Oops! 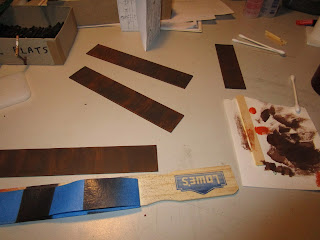 Since this car looked to be in good shape I thought a stack of steel plates would be a good choice. The nearly-clean green body, the stained wooden deck boards, the rusty steel plates, the shiny black tie-down straps, and the bright white-wood stake pocket chocks and separation boards would make for a visually contrasting load. I had built some steel plate loads in the past, but the March 2016 issue of Model Railroader contained an article by M.R. Snell that jogged my memory. I cut pieces of  0.060" thick styrene into several lengths (three of one size, and a smaller one for the top for variety) and then sprayed them with flat gray primer. Then, they were dusted with Rustoleum camouflage paint to give some tooth as well as a base rust coat. Then, multiple layers of drybrushed brown and orange were added to indicate a patina of rust that was developing on the untreated "steel" plates. 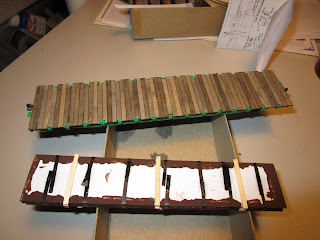 For the wood which separated the steel plates to allow for forklifts to be able to move it, as well as banding to go under it, I used some more of the Mt. Albert wooden ties I had lying around. I split with with my knife into the sizes I wanted and then attached them with superglue gel to the bottom of the styrene plates. Then, piece by piece I built up the load using more wood and glue. For the banding that goes around the load, I had two choices. To mimic heavy-duty cloth strapping I have used slices of masking tape painted a dirty yellow, but for blued steel banding I used strips of black electrical tape. You can't trust the adhesive alone, so I superglued the ends under the load.

The deck was lightly weathered with oil paint washes, but I didn't want it to look beat up. The steel load was glued to the deck and then additional banding was added through the stake pockets. Chopped wood was installed in other stake pockets to prevent the load from shifting completely off the car due to rough handling. After that, I glued on the delicate brake wheel and shaft and the car was complete!
Posted by DandHColonieMain at 4:43 AM