This steam locomotive project had been neglected for quite some time. I reached the point in its construction (nearly the end, sadly) when four factors conspired together to shut the whole project down. First, the boiler kit came with yellow insulating material that needed to be wrapped around the boiler. Then, it had to be held in place while wooden board cladding (provided in the kit) were wrapped around it. Then, brass straps had to be placed around the boards and the whole thing secured with screws and nuts. With tape it was manageable, but after three attempts (don't ask) the yellow insulation was shreds and the bolts were superglued to the nuts. So, I pouted and let it sit for six months until I thought to call Jason Kovak at The Train Department who had replacement ceramic insulation sale that would work great. That was 6 months ago. But, by that time the garden railroading season was over so I did nothing.

Second, I wasn't sure if I wanted to paint everything (boiler cladding, gear assembly, brackets) black or leave them wood, or perhaps chemically darken all the metal. I purchased some Brass Black which would work well but I would need to completely disassemble and clean (with lacquer thinner) the parts for the blackening agent to work properly. The all-black look would really make it appear like a Welsh quarry engine, but I wasn't sure if the paint would hold up on the brass without flaking, and that wood did look a bit nice. The decision weighed heavy on my mind and involved a bit of work, so until I figured out what I wanted to do I did nothing.

Third, I needed to mount the couplers onto the ends of the frame but I misplaced my jig that I use to mark the holes. I use this fixture on all my rolling stock, and didn't want this to be inconsistent with my other cars. I actually use two different standards for my equipment. Originally, I mounted dual-buffers on all my cars which were made from jumbo thumbtacks painted black with silver ends, and they passed as faux standard gauge cars. Then, I converted some to single center-buffer cars which is more narrow gaug-ish, and the height was based on what Roundhouse used (25mm above rail height). Being lazy, until I could find that fixture I did nothing.

Finally, around this time my new 7.25" gauge battery engine and bulkhead flatcar kits needed to be assembled and they took priority over all other train projects, so for that and the reasons above I shelved this engine. Until recently, when more time became available.

To start, I wrapped the wooden boiler cladding with blue tape to keep it together, and then used my Dremel to cut through the bolts holding the brass bands. After that, the old yellow beat-up insulation was replaced with some nice new white stuff. The process was reversed for the wood cladding and brass banding, and within five minutes the project was done. Next, having found my coupler alignment jigs whilst cleaning the basement it was another five minute job to mark the two holes, drill them out, and mount the buffers. Because there wasn't enough clearance room behind the buffers for the retaining nut, I drilled undersize and screwed the buffers tight into the wood. 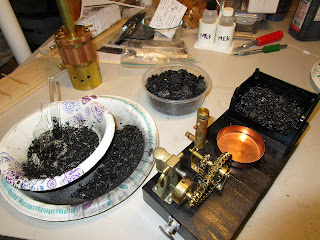 Wanting to do something fun, I worked on adding a coal load to the bunker. To do this, I used my usual method of mixing real coal with two-party epoxy into a sludge, and then scooping it where I wanted it. I didn't have any "g scale" coal handy, so I took some full size Arcade & Attica Railroad coal chunks and broke them up outside in a ziplock bag with a hammer. Then, by placing them between two sturdy paper plates I could sift out it to a certain size by shifting the gap between the plates. The coal dries shiny from the epoxy which is okay, but if you sift some fine coal over the wet epoxied coal and let it all set you can then shake off the excess and have a nice, realistic matte coal pile. At least I think so. 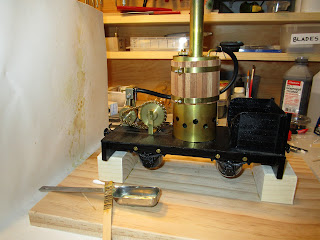 Then I connected up the tubing and was ready to go. First, I filled the copper storage cup with two tablespoons of Sterno, and oiled everything all around. The boiler received 100 milliliters of distilled water, and the displacement lubricator got some steam cylinder oil. All told, it only took about 5 minutes to prepare. The engine was set up on blocks (that were glued to the base, just for extra security) and lit up. After 7 minutes I rotated the flywheel and after some sputtering and help with the flywheel it took off. Or, at least it ran. The cylinder exhaust shot straight forward and made a real mess of the white cardboard I had set up to prevent just such a thing! But, at least it worked on the first try. 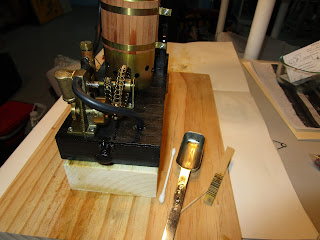 After 13 minutes of running it slowed down and stopped. After it all cooled, I drained the boiler and found about 20 milliliters of water left, as well as a collection of black, teal, and bronze colored flakes. Residue from soldering the boiler, most likely. I also noticed two problems that I wanted to fix. First, the cylinder in-port barb was loose so I repaired it with Loctite 680 per advice here. (Even though it ran fine with it loose). The other change that was needed was to figure out how to stop that oily mess from exhausting out of the cylinder. I drilled a hole in the deck and routed some exhaust tubing down through it to the track. 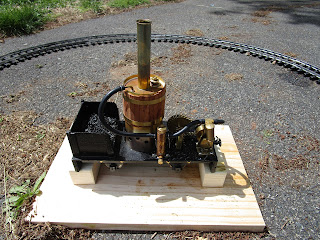 I then ran the engine again, filling it up with a little less water, and it ran for about 17 minutes after coming up to temperature. I think the parts are starting to bed in and I was even more pleased with its performance. The exhaust worked well though it flooded the wood below with water. I attempted to test it on a circle of cheap tinplate Bachmann G scale track outside but it didn't like the tight radius (and, perhaps, the gauge was pinched or wide in points due to the inferior track) leading to lots of bumping and derailing... and even tipping over! But, it is fast enough to be amusing. So, success! No, it isn't a Roundhouse Lady Anne, but it is something...
Posted by DandHColonieMain at 10:58 AM