The ends are a collection of parts from various sources. The grab irons are formed from stainless steel wire. The brake wheel from Kadee (#2045), and the platform and support brackets are from a Details West (#2012) set. The brakewheel "chain" hanging down is from the Tichy brake casting set. White styrene rod and brackets run vertically. Some additional wire which runs from the brake wheel to the bottom finishes it off. Ladders are from Plano Model Products (#12121). The black horizontal walkway platforms at the bottom are pieces of an Athearn blue box caboose roofwalk. Precision Scale Co. air hose castings (#39117), as well as the Bowser / Cal Scale train line hoses (#275), hang out from the bottom. 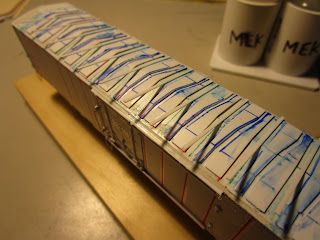 The roof had a row of rivets that went all along the perimeter. It also had ribs that went crosswise between every raised roof panel. Those I had laid out with green marker but had forgotten to install. In my haste to add rivets to everything, I mistakenly applied rows of rivets along every green line. Realizing my error, I then had to remove them all which turned out to be easy. I then installed the ribs, one side at a time until the glue cured, and then bent them over and secured the other side. I used wooden toothpicks to hold them down (so I wouldn't leave fingerprints on the soft styrene.) In a couple of minutes, the job was done. 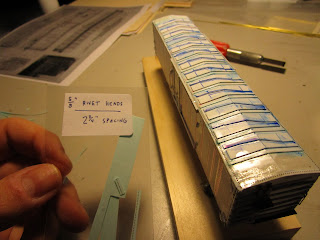 After that, the edges of the ribs were trimmed to final length and I installed rivets around the perimeter of the roof.  I used 5/8" rivet heads, with a 2.75" spacing, to go all the way around. At this point I was piecing together parts of rows and the process itself went quickly but I had to make sure everything lined up along the length of the car. There was a bit of joy in the process as I knew the car was almost complete. It was during this time that I accidentally scrapped off some of the rivets, so after doing repairs I gave the entire car a light spray of Testors Glosscote. I was hesitant to do this as I didn't wash the body first, but with the rivet decals it is impossible to wash it anyway without them floating away. I don't know how this will affect the final finish. 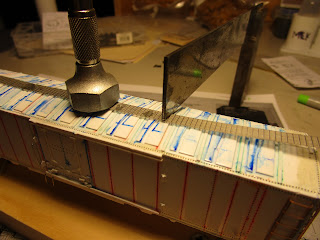 The roofwalks themselves are beautiful etched metal products from Plano Model Products (#194.) There are various styles available and it was easy to find what I needed. They don't come with the support brackets, (though they are available separately), so instead I took some Evergreen #264 c-channel and sliced it into thin pieces. These were then further cut down in height and glued down the center of the car. When cured, I used a file lightly along the top to bring them all into the same plane. I then superglued the roofwalk down, using a variety of metal support brackets to hold down each joint. I could only do a couple at a time. In the future, I will invest in some super glue instant activator.

The only other detailing left to be done is to modify the trucks to add additional springing. After that, the car is off to the paint shop. Decals are on order, so it won't be long now.
Posted by DandHColonieMain at 7:39 AM