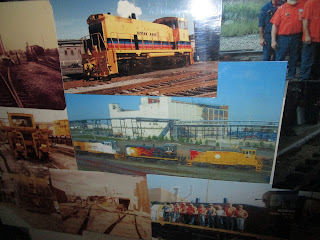 A couple of weeks ago I saw on Railroad.net a thread about a new photography exhibit titled "The Power to Move Us" that was being displayed at the Kodak Photo Gallery in Rochester, NY, my hometown. Having not been to Rochester in a while, I figured I could combine the trip to the exhibit with a visit with my parents and set up a weekend to go. The exhibit, per the Kodak website, was to contain photographs from local railfans as well as information about the Kodak Park Railroad which serviced much of the Kodak infrastructure in Rochester until only a few years ago. An article in the July 1988 issue of Trains magazine featured the KPRR and included a great map of it. In 2007 the KPRR entity closed, and all switching was transferred to GWI Switching Services. 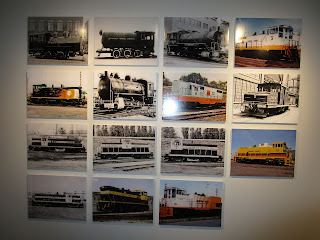 Of particular interest was the display showing all of the KPRR engines, though many received multiple paint schemes through the years. Some of KPRR's equipment has been donated to the Rochester & Genesee Valley Railroad Museum, a place I haven't been to yet and really should. They started with fire-less steam locomotives (apparently the chemicals used to make film are flammable) and progressed through centercab and road switchers to finally modern switch engines. (A good history of their engines can be found here). The classic black and yellow Kodak paint colors transferred well to the engines, though they did a couple of one-off engines including three painted like automobile hot rods. 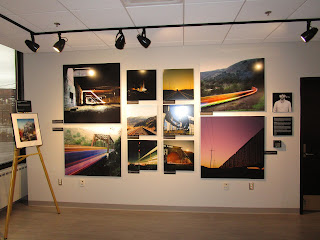 Getting to the photo gallery was easy enough, but when we arrived the Security Officer told us that the exhibit was closed. Why, on a Saturday during the posted hours and days of operation it would be closed he couldn't answer, but closed and locked. Thankfully, he opened it up for us. It wasn't very big, or perhaps I was just expecting more. There were lots of enlarged photos taken by several railfans showing interesting train subjects but I had seen many of them online at the gallery's website, so they weren't a surprise. Others were fun and colorful and showed blurs of trains, but alone weren't as interesting to me. 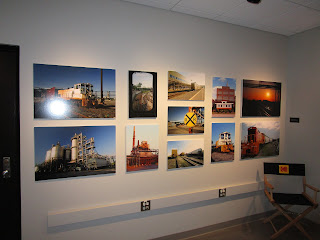 The Kodak Park Railroad is sentimental to me for various reasons. I grew up in Rochester and my father worked for Kodak. My friends worked for Kodak. Everyone worked for Kodak. I modeled it on one of my old HO layout. Driving in the area, you could sometimes see the trains shuffling cars about or moving huge cuts of coal cars around. Kodak used to keep on hand in a giant pile visible from the road enough coal to last for several days, if not longer. Sometimes the coal trains brought by Conrail seemed to go on forever. The last coal train was delivered in March of 2018, and after that an era ended. It was an interesting operation that required full coal trains to pull through the area and then back into the park. It closed a busy four-lane road for a while when that happened. Later, my parents moved to the area and you could see the trains from their backyard but they never seemed to operate when I was visiting. Grr! 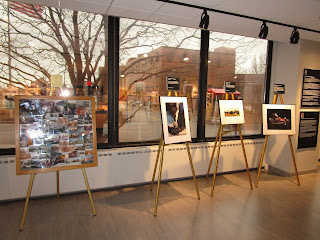 The Kodak Park Railroad even had its own caboose, discussed here, which sadly was in an area of the industrial complex that is not accessible to the general public. Of interest though is that it was converted by Kodak for railroad tours of the property to visitors, and to make it more comfortable for the guests the inside was gutted and benches were installed. That is pretty neat. I think though that Kodak missed the mark by not asking for more local railfans to contribute pictures. Despite not being allowed to legally take pictures on Kodak property, I am sure there are other images out there. 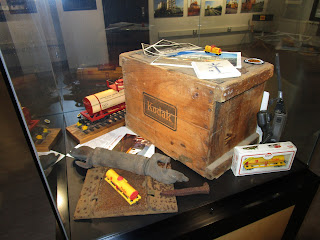 There was also a small display of some trains decorated for Kodak. I have a couple models myself and not all were shown, but there were a couple I was unfamiliar with and will start looking for. Not shown was the infamous K-Line o scale Kodak train set, which apparently was never approved for sale by Kodak and thus had a short shelf life. That would be a fun train to collect. They also had a note that KPRR pins and patches were for sale in the gift shop and I would have loved to purchase them, but the gift shop was closed (and under renovation) during our visit. So, hopefully they are available online somewhere for purchase.

All in all, it was a fun visit. I hope that the history of the KPRR will be preserved but like many other industrial railroads it will probably lowly fade into obscurity as parts of the plant close and it becomes obsolete. Thankfully, there were some who took the time to document it on film (ironically).

I don't know the legality of putting pictures on a blog that were originally taken by others (even if it is a poorly taken picture of another picture), so most of my images show what the gallery itself was like and are not close-up reproduction images of those taken by others.
Posted by DandHColonieMain at 7:29 AM