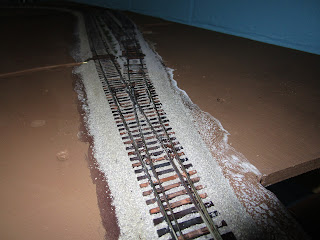 Having run out of my own self-made scenic cement, I decided to take the easy way out and purchase some commercial adhesive. I had read on a prominent modeler's blog that he converted to using Scenic Express' prepared Matte Medium exclusively so I decided to do the same. Never observing the "try it first" approach, I purchased a whole gallon of the prepared stuff online. After shaking the big jug vigorously, I then poured some into a smaller container and worked on some ballasting. It looked milky white when it was applied but all of the other adhesives I had used did too, so I figured it was okay. 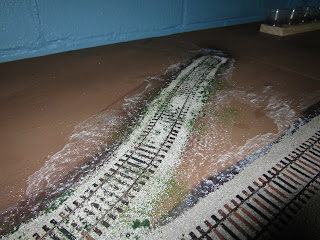 The next day I went to check on my layout and was dismayed. The edges of my ballasted track where the excess had pooled had turned white, almost as if someone poured skim milk on my layout and let it dry. The ballast itself showed no discoloration that I could detect, but where it pooled on the un-sceniced plywood there was white residue. When I told the modeler I mentioned above about the result I had and asked if it ever happened to him, his response was: "I've stopped using that stuff for that reason." DOH! I also reached out to Scenic Express who said they thought the age of the product might be a factor and suggested I discontinue using it. When asked, they did confirm that their product contain no talc.

Fun fact: it cost $35 with $15 more for shipping, so I have a $50 gallon of stuff to figure and no idea what to do with it. So, back to making my own scenic cement per Dave Frary. I may try and let this stuff settle and see if anything is at the bottom. I hate to throw out a whole gallon, but modeling a milk explosion on my layout isn't exactly the affect I am going for...
Posted by DandHColonieMain at 4:24 AM