I was struggling for a while with how to control my new turnouts. Originally I installed Tortoise switch machines but I didn't like the rocker switches I used to control them. They felt weird under my finger. A small issue to be sure, but one that bothered me. Also, I didn't like how it added extra wiring underneath the layout. But, they powered the frogs (something that was important to me), they worked on both DC and DCC, and they were done. DONE!

Replacing my broken Micro Engineering switches with Pecos required me to remove the Tortoise machines from the underside of the layout because their throw rod locations didn't match. I never reinstalled them. Instead, I assumed I would move the points with a control wire in a tube that ran to the edge of the layout. While common on British exhibition layouts where they are mounted behind the backdrop, in the USA people usually put them right next to the switch where their massive size sticks out. A picture of some installed on Mike McNamara's Northeast Kingdom layout shows how inconspicuous they can be. Recently, I operated on two layouts with ground throws and enjoyed the little process of moving the lever back and forth.

I was worried about powering the frogs for my DC trains if I used a Tam Valley Depot Hex Frog Juicer, which apparently only work on DCC. So, I purchased some micro slide switches to see if I could utilize them instead. At about twenty-five cents each, they were dirt cheap and easily controlled the points. But, cutting into the plywood benchwork top to mount them flush would be difficult. So, one afternoon I fabricated a wooden jig and then cut and glued styrene up to make mounting boxes for the toggle switches. They worked fine but were too tall and looked kinda silly. So, I nixed that idea.

So, I decided to just move on and install the ground throws and get it over with. The analysis paralysis was killing me. In the course about about 90 minutes I had cut and gently formed enough 1/32" K&S brass tubing (#1144) and 0.025" (#500) steel piano wire to control all six switches. The Caboose Industries sprung ground throws (#5218S) were drilled to accept the wire and installed. A nail punch really helped. The rods were taped down and yellow glue was poured over the tubes to secure them, keeping away from the ends. (I first tried a staple gun to but it crushed the tube... doh!) Once the everything was spiked, glued, and painted, it looked a lot better. 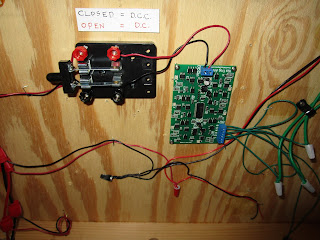 While listening to a 2 hour long Mozart concert, it suddenly hit me how to use frog juicers and still run DC trains: make the frog juicers optional. They are powered with two wires that connect to the DCC bus lines. If I inserted into that connection an easy to reach, easy to break switch that would disconnect those wires, then the frogs would become un-powered. That would allow regular DC trains to run over them. Oh sure, I agree that having powered frogs for all trains is a good idea. Especially the older type of DC ones I might want to run in the first place. But, this will work. I bought a cheap knife switch on EBay and installed it. It is easy to see when I look under the layout. It reminds me of something that might be in Frankenstein's laboratory. 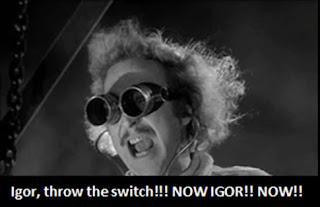 I wish Tam Valley Depot made a 3-frog juicer, as all four of my layout sections have exactly 3 switches each. Here, I combined two sections onto one Hex (6-frog) juicer but that means I have three wires running from one section to another. (In the process, I ran out of green wire. Grr. At least I had the self-control to order more instead of substituting some blue wire I have lying around). My staging yard already has a frog juicer, and I will run the corner curved switches frog to that too.

From Mozart to Frankenstein...
Posted by DandHColonieMain at 3:55 AM