Cleaning up the work bench 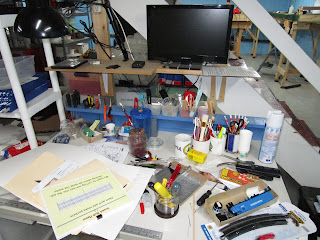 Over the winter I was moving along full speed on some rolling stock scratchbuilding projects when I hit a couple of snags. Some large scale (1/8 size) trains I had ordered as kits arrived... one for a battery powered diesel engine, another for a bulkhead riding car... and I wanted to get them finished for the 2019 season. A friend also offered to help me with a project involving my 1/8 size caboose, so that too was put on the work bench. Actually, I have a sturdy full size banquet table I mounted on casters that I use for these larger projects that I roll around when necessary. Then, when they were done I decided to finish ballasting my layout (and replaced every track switch along the way) and finalize my M.M.R.- Civil which consumed another three months. With only so many hours available, my smaller modeling projects were put on hold. I am only now able to get to them.

Unfortunately, the eight months of not using my workbench had turned it into a convenient place to dump junk. Projects, tools, papers, files, concert programs, etc. all got put there. Plus, I discovered that my needs had changed and I wanted to reorganize my tool and part storage area. And that killed any buzz I had about jumping back into my ongoing projects. 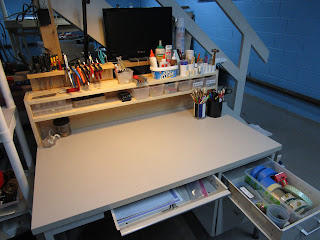 I looked at MicroMark, Amazon, and other online places for desktop organizers and found some really nice ones. But, they didn't fully maximize my space and cost more then I wanted to spend. Worse, they weren't really expandable and I still don't know exactly what I want. I didn't think purchasing something that might prove to be wrong for me was a good idea, so instead I went to Home Depot and purchased a 1" x 12", a 1" x 6," and a square dowel and made something on my own. It cost around $50 and only took about an hour (word of warning: don't rely on Home Depot for critical cuts). It is basically a box with no bottom and a shelf that is perfectly sized to hold some plastic storage containers that I had. Nothing fancy. 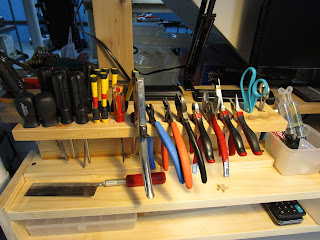 My previous design had holes drilled in some 1" x 4" lumber for screwdrivers, pliers, scissors and the like. That worked well but I didn't have enough holes for my growing collection of pliers, the screwdrivers were too spread apart and wasted space, and I had other things there that I didn't need. So, I laid them out differently. It is essentially three 1" x 4" boards glued into an C-shape. Since the wooden frame is somewhat tipsy I screwed it to the board below. I tried drilling to more holes on the right but the wood was so dry that it split. If I attempt it again I will clamp the wood first and then drill. For right now, though, it works. 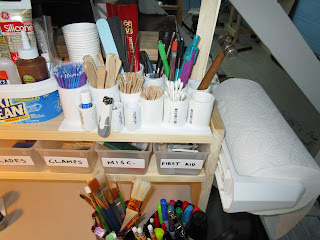 To hold lots of my smaller things I was a bit stumped. I looked on Ebay for small wooden pencil boxes and there are many cheap ones but they were too large, and other containers weren't tall enough. I didn't really feel like building my own out of wood, so I wandered over to the plumbing section of Home Depot and found all different sizes of PVC pipe couplings. They are generally smooth on the outside with a thin ring on the inside. For about $15 I bought about twenty in various sizes and a can of PVC pipe glue. It smells horrible (normal hazard warnings should be heeded) but worked well to attach everything to some 1/8" thick styrene I had on hand. It just sits on the shelf without being attached.

For my primary styrene glue, MEK (Methyl Ethyl Ketone), the stuff is pretty toxic and if it spills on your model your paint will be damaged or worse, your parts will be deformed. I was using a needle applicator bottle from A-West (1" tip, size #16, their smallest) but it clogged. They had provided a tiny wire to clean it but even finding the wire was a pipe dream (get it, eh?). So, I had to use a small brush and the bottle of MEK with just the regular screw cap. It tipped once, which was enough to convince me to get a better solution. I purchased some replacement ones from Hobby Masters (#27RW Gray), including some replacement tips. Still, there are times when I want to use a brush to apply glue, and I also want to keep track of where the two bottles are. Looking at my collection of spare pipe couplings, I also whipped up a glue bottle holder. With one extra one, I made a paint bottle holder too (with another smaller pipe coupler inside to keep the paint bottle from slipping down.

Now I have a nice, clean workbench and am ready to get started on my smaller projects. Which might just happen, or might not, as I decided on a whim last week to begin construction of a Japanese-themed T-trak N scale module. Long story... perhaps a future post... but the empty workbench sure proved handy!
Posted by DandHColonieMain at 4:21 AM