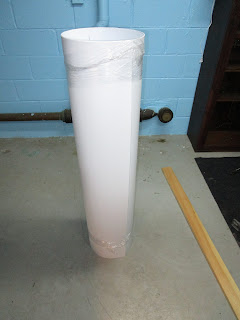 I frequently run out of sheet styrene that I need for my scratchbuilding projects. The local hobby store has some in stock of the smaller sheets, and even some of the oversize offerings that Evergreen Styrene sells, but I can't always get there and sometimes I have found that the thickness I need is missing. So, I called around and found a local plastic distributor (Piedmont Plastics) that was willing to work with me. They are a national chain but have a local branch about 10 minutes from my house. I asked if they had any 0.040" thickness styrene in stock but they didn't. They offered to order a 4'x8' sheet from another one of their locations, in this case Chicago, and they said it would only take 2-3 weeks to have it in Albany. In this case, it took two weeks exactly. I worked with a helpful woman named Sarah who was very pleasant, and the total cost including shipping was less than $20. That comes down to $0.004 per square inch, which is much cheaper than Evergreen's "economy pack" of 8"x21" x 3 sheets which sells for around $15 and equals about $0.030 per square inch. That is about 7x as much. And, I can cut my large sheet into any shape I need without having seams. 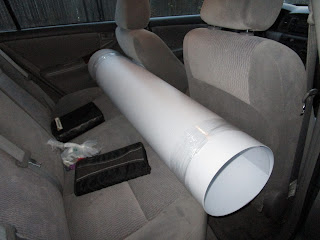 The only issue was that I couldn't fit it in my car. I figured I would bring a knife or scissors and cut it up in the parking lot, but then I realized I could just roll it up. It wouldn't snap or break on me so it seemed like a good plan. Apparently, no one has ever asked them to do this before as the loading guy I talked to had to discuss it first with his manager. Then, we tried to secure it with plastic wrap stuff and it kept slipping. Next time I go, I will bring a roll of tape and just do it myself.

Either way, I now have a ton of styrene to work with. The process was so easy that I will probably go back and order a couple of other thicknesses (0.060" is my favorite) for the future.
Posted by DandHColonieMain at 7:42 PM