Well, it's a wrap. Another wonderful day come and gone. If you have never been to the Springfield Train Show (http://www.railroadhobbyshow.com/) then you are really missing out. There are eight (!) acres of trains... consisting of model layouts, exhibitions, prototype train displays with brochures, tables upon tables of books, models, slides, etc. and tons of other great things. It is, quite frankly, impossible to see in one day- which is why it is actually a two day show.

For the past 5 years the local chapter of the NMRA has chartered a bus to go out, and I think that it is great. Not only do you not have to deal with driving or parking, but after 8 hours of walking on pavement you can relax and sleep on the way back (or play with your newly purchased goodies!) Lately, my wife has joined me and she usually has a good time too though like most normal people she gets tired after 4-5 hours of solid walking.

This year was the first year that I had to be careful of my spending for two reasons: (1) I now have a mortgage payment to deal with, and (2) I am building a layout now, so the things to look for and prioritize have changed. Specifically, I was hoping to find Micro Engineering track, Highball ballast (recently discontinued), and Tortoise switch machines at good prices. Instead, I bought more of the same!

The first thing I bought was three different 40/45' trailer kits. Lately I have been really interested in building Trailer-on-flatcar (TOFC) models even though the required minimum radius of my layout probably won't support it. I will likely post on that sometime in the future, but I have been collecting inexpensive 40' and 45' trailer kits to go on 85' and 89' flat cars. I found three more that would be appropriate for the early 1980s for $10 total. Plus, one was in the Rock Island scheme which I like.

Next, I found a D&H bay-window caboose that was a custom Bev-Bel paint job for $3. It was assembled, somewhat poorly, and there were holes in the roof drilled for radio antennas and marker lights. I will need to fill the holes and paint the whole roof black (Bev-Bel never did it), but for the price it was good. Last month I worked on my fleet of nine D&H cabooses, including adding weight, window glass, painted railings, metal wheels, and weathering. I am pretty burned out from that project, so this caboose may sit around for awhile. 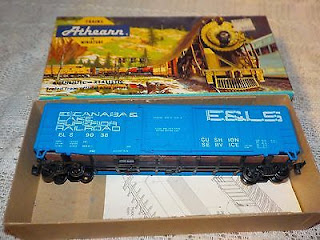 I also bought a Escanaba and Lake Superior RR 50' boxcar. Did I need another one? Well, not really. I doubt it ever would have made it to D&H rails. But, the E&LS is a special line to me for two reasons: (1) they sold the Arcade and Attica Railroad their #14 ten-wheeler (my favorite steam engine), and (2) they currently have on their property the D&H's two Baldwin shark engines. So, I had to buy the boxcar. It will likely sit in my kit pile though for some time.

Finally, I had an impulse purchase. I couldn't help myself. There was a seller with a box of about a half-dozen Athearn undecorated, unpowered RDC units for $5. I nearly bought one, but I held my composure. I mean, what exactly would I do with it anyway? 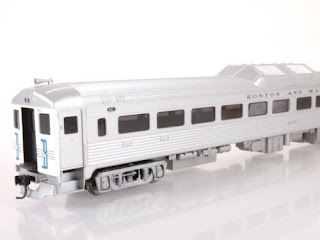 Then, I turned the corner and saw someone selling a new B&M Life Like Proto 1000 RDC for $20. After checking that it had the McGuinness scheme on the ends (instead of the "Minuteman logo") I snapped it up. I am partial to the scheme because my initials are "B&M" and the black/white/blue color scheme is sharp. Plus, I had the identical model in college but sold it off when I briefly converted to N scale. As my wife put it moments later when she caught up with me, "I left you alone for 10 seconds and you buy something!" It won't fit my layout at all, but I am only human. Surprisingly, I didn't buy any old magazines or paper. Maybe because I am running out of space to store it? 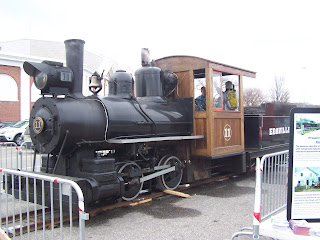 We did visit the displays of the Boothbay Railway Village, the Wiscasset, Waterville & Farmington Railway Museum, the Sandy River and Rangeley Lakes Railroad museum, and the Maine Narrow Gauge Railroad Co. & Museum. For my birthday around Memorial Day weekend this year, we are going to Maine to do the "Two Foot Gauge Tour." Four railroads in three days, but it should be fun.

The Boothbay Railway Village even had brought an engine out to steam up and slowly travel up and down a short stretch of track they laid in the parking lot. As the temperature was cold, I looked on from the comfort of our tour bus and noted that the whistle and safety valve were really, really loud!

My wife, who is interested in N scale, picked out several more cars for her small but growing collection. Looking through cases and cases of small trains made me realize that my eyes just aren't what they used to be.

The only downside is that now I need to wait another whole year before Springfield comes around again!
Posted by DandHColonieMain at 7:14 AM