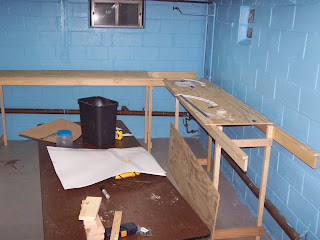 Well, this past weekend my layout took another step forward. I attached the leg assemblies to the L-girders, doing my best to space them 1/5 the total length of the girder in from the ends. This was per the chart in the benchwork book. Since I had to splice the 1x2" rail on the L-girder I used another piece of wood as a gusset, and that interfered with the optimal location of the legs. So, they are actually located inward 2" more than they should be. However, the ends will be secured to the perpendicular side-girders so I think they will be fine. Also, one L-girder came out warped so I clamped it to the table and then glued/screwed another 1x4" to it to help mitigate the bend.

As it currently stands, the layout lacks no diagonal supports for the legs, and the tops of the L-girders and the ends are not tied together with any cross braces. It is not sturdy, and I don't plan to put much weight on it for now. The bracing will come in another week or so, and then it will be leveled and all three pieces will be tied together to make one strong unit. 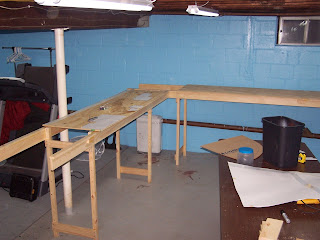 But, it was strong enough for me to set everything in place to see how much space it took. And it barely fit in the 12' width area that I planned for it. I am also glad I am currently only building it 12' square instead of 12' x 17' because that would be a monster. I hoped to leave some space around all four sides so that it wasn't touching the wall, but it might be closer to several inches rather than a foot as I originally intended.

Anyway, with that done I roughly put the plywood pieces on the L-girders and then set out to sketch what I thought the track plans might look like. One had been done years ago, so I cut and tacked it in places and transferred the lines. For two other sections, I went on rough sketches. My challenge is that I want 24" radius curves and I don't want much of the curve to fall on the side sections. That means the track has to end up near the back of each module to have enough room to curve on the corners. This makes planning any features on the far (North) side of the track very difficult. For one area, representing Keis Beverage and Norlite, I used some graceful curves to bring the track closer to the front of the section and add some visual interest. And, for the Mohawk Paper section I built in the only run-around on the layout (so far) and also let the spur into the paper mill pull as far away from the main line as I could as it will need to drop in elevation too. 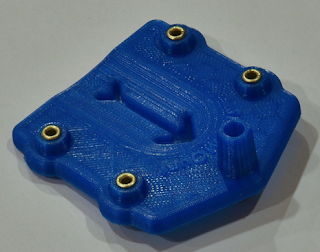 Knowing the trackplan will be important when assembling the box frame structure for each section. I may use Tortoise (by Circuitron) switch machines mounted under the layout and if I do, I need to make sure not to put a cross brace in the way. It is easier to shift a cross-member a couple of inches now, and that way their location won't dictate where I can or cannot locate a switch. While surfing the web, I found someone on EBay ("jweed") selling a nifty template for installing the switch machines. If you search for "Tortoise switch machine drilling template" you will find it. With shipping, it cost nearly as much as a machine but it looks neat, should work well, comes in a variety of colors including glow-in-the-dark (!), and will make my life easier. Yes, a paper template would be just as easy to check clearances but when the time comes actually install them, I will take all the help I can get! I ordered mine in green to match the machines.

A friend recently asked me why I was buying all this expensive lumber and not just a bunch of 2x4" stock that I could build into a frame. It was an excellent question, and I am not sure I know the answer. I suppose it is because I would rather do it right following someone else's plan instead of making it up as I go. My last 4x8' layout in the late 1990s was framed with nothing but 2x4" lumber and it was fine, though wobbly (I didn't brace the legs). With the 1x3" and 1x4"lumber ($28) used to make the leg assemblies, the extra 1x4" ($6) I used to gusset the warped I-beam, and the carriage bolts ($8) I will insert into the legs to level the layout my total bill is $300. I certainly could have done it cheaper. But better? Probably not for me. I will likely be in around $500 when it is all said and done, which seems like a lot but I trust those who have gone before me who have warned that buying cheap lumber and rushing through the benchwork will lead to a disappointing layout.
Posted by DandHColonieMain at 3:52 PM