I started planning what I was going to do for benchwork for my layout. As has previously been mentioned, I want it to be sectional/movable, but not necessarily easily movable. I don't plan to take the layout to train shows and such, but it will be reconfigured over the life of the layout. Also, flipping it on its side for wiring is a must for me. Legs or other supports will be determined later. 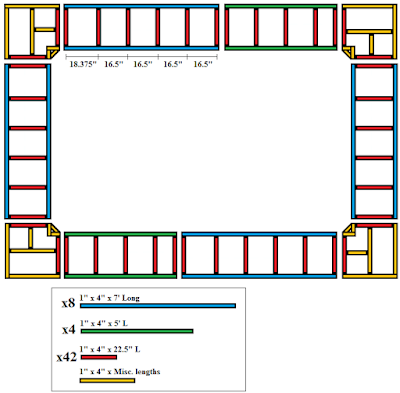 What I realized once I started working in the basement again is that this might be too large for the space I had. I allotted a small walkway around the layout for access to the washing machine and dryer, but that might not fly with my wife. As drawn at right, the two green sections are 5' long.

So, I may take the two 5' sections on each side and instead make them 3' sections. Since that is definitely too short for the Watervliet section, it will just be a filler for now. As for the part that adjoins the Mohawk Paper section, it might just be an extension of that. So why not build Mohawk Paper as two 5' sections, which would be easier? Because I cannot see myself devoting 10 feet of the layout to one industry. Allowing 7' and 3' sections gives me more flexibility.


Posted by DandHColonieMain at 11:40 AM