This shot of Alco C424 #451 sitting in Mechanicville yard was taken in July 1985. There are several interesting things about it. First, it looks like the engine is sitting on a track radiating from an old turntable, which would be just off to the right. If so, I am surprised that the D&H still had a working turntable in 1985.

Second, note the ties buried in the ground at the end of the track to presumably hold the engines on. I have seen that done before, but never painted orange. Maybe it is so that they can be seen after a snowfall, or by vehicles driving on what looks like a service road at the edge of the tracks. And some ties are broken (or rotted) off. 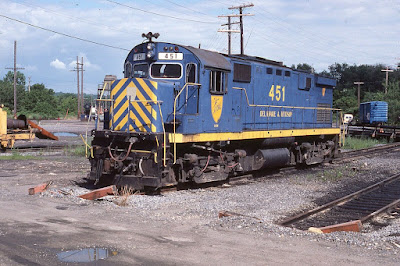 Third, on the left is a yellow-painted MOW snow melting machine. The funnel pointing down would direct super-hot air onto switch points and other areas that were jammed up with ice. If this is one of the machines that had a jet engine providing the heat source, it would also be extremely loud.

Fourth, in the back right is a solid blue boxcar. At first I thought it was one of the uncommon all-blue D&H MOW boxcars, but now I think it is probably just a faded B&M boxcar.

Posted by DandHColonieMain at 3:57 AM