Then and Now: Montgomery Ward building (1995)

Menands was where I first lived upon moving to the Albany area and much of my railfanning was done along what I refer to as the "Colonie Main," which ran through Menands. My wife and I even looked at starter houses there (the first house we toured had the Colonie Main literally 100' from the front door, but it didn't have a suitable basement... sigh). It is no wonder that I ended up modeling it.

The first shot shows a southbound Canadian Pacific train featuring engines #5512, #5426, #5425 and #5419 passing by the old Montgomery Ward building in Menands on October 02, 1995. The overpass at the far right allows Route 32 (Broadway) to cross over. The former "Breaker Island Branch" used to come off the main line on the near side of the tracks, and a small yard was also here. The branch line led to the Menands Farmers Market. In this picture it looks like the former yard area is being regraded with dirt or stone, and the telephone poles are an odd site sticking up out of nothing. 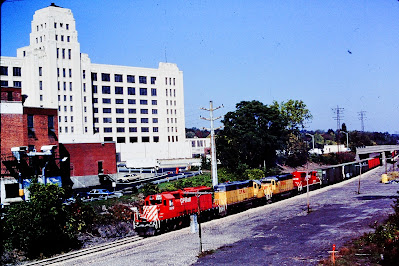 The last three pictures were taken on May 16, 2005. It was sitting on the grass embankment of the Route 32 overpass and was waiting for a northbound CP train. The first shot shows it passing under an on-ramp to I-787, with the old Williams Press printing building in the background. The former yard was just to the left of the engines. 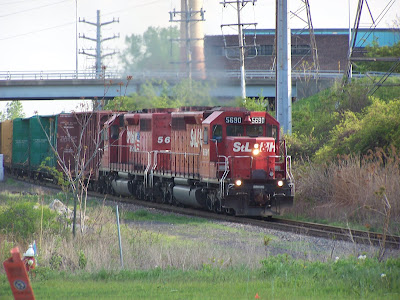 The next shot shows the engines heading by the former Montgomery Ward building in the background. Timing is everything with train pictures, and I "missed it by that much." 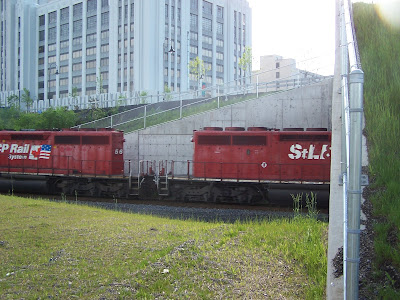 Finally, the last shot shows the same view as the second picture above, but sans train. It was nice to come here on a warm day and watch for trains which studying my law books. 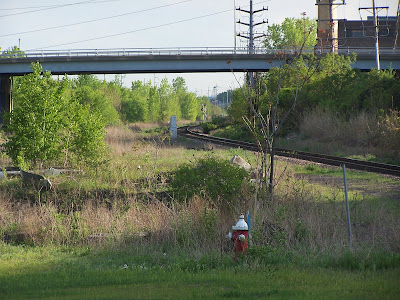 Interestingly enough, when I moved here there was an former Seed Company located on the other side of the Route 32 overpass that had an old boxcar in the back used for storage. A friend of mine had even worked there at one time. Then, around 2010 I think, the area was redeveloped and leveled for a parking lot and the boxcar removed.

Posted by DandHColonieMain at 4:54 AM