Here are two shots of the same area. The trains are heading north through North Albany. The first shows RS11 #5001 pulling a tank car train on 6/29/1986. The building on the near side of the tracks on the left is the old Terminal Millwork plant. The 1986 shot shows the abandoned siding to it still in place. Sadly, I have no idea what the building is behind the trains as it is though it still remains complete with the green trim visible in the one picture. 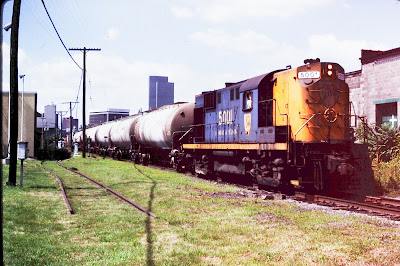 When I went trainspotting on 4/24/2005, I caught a mixed train pulled by Canadian Pacific engines. By this time, the and the siding was long gone. The facility on the left is now Noble Gas Solutions, which sells various types of gases in tanks. Whereas once I could park in the abandoned parking lot to take pictures, now it is surrounded by chain link fences. 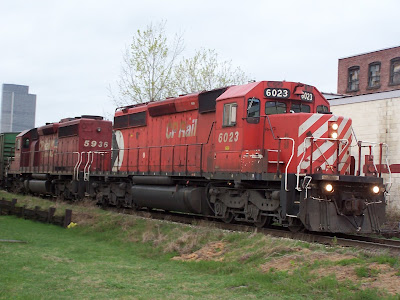 Posted by DandHColonieMain at 6:27 AM