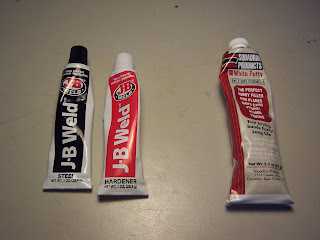 With my caboose project nearly finished as far as styrene fabrication goes (it still needs some work done, however), I decided to start my next scratchbuilt car. Or two cars, actually. I will discuss them sometime in the future, but for right now I want to relate an unfortunate story. After building the frames for these two cars, I decided to fill a couple of cracks with Testor's Putty. You know, the whitish stuff that never seems to stick where you want it to and makes a mess when sanding? Yup, that stuff. Well, I used it on these two cars and it worked beautifully. It flowed nicely into the joints, it was easily removed with a blade from areas I didn't want it, and it wasn't grainy at all. I couldn't understand my good fortune but it finally was doing what I want model putty to do. Later that evening, though, I noticed it was sticky. I hadn't waited the full 4-6 hours so I left the cars alone on my workbench for a week. Then, last weekend I tried to sand away the excess and it was still sticky. That can't be good!

It turns out I didn't use putty at all. I saw to my horror that I had used the white "Hardener" tube from a 2-part JB Weld metal epoxy! I rarely keep it on my workbench but I had put it in the area where I store glues (it is a glue, after all) and wasn't paying attention when I pulled it out. I managed to scrape most of it off the models with a chisel blade, but I am not sure if that will be enough. Hopefully, I managed to avoid a train wreck!

Posted by DandHColonieMain at 6:26 PM