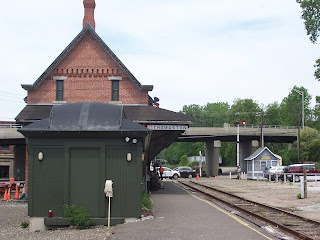 My birthday was recently and I did two fun train related things to celebrate. First and foremost, I had my mainline operational and a train running on that day. Second, though it occurred first, my wife and I went to a train museum and rode on its train. I try to do this every year around my birthday, which frequently falls on Memorial Day weekend. This year, we left New York and journeyed to Connecticut (a first for both of us) to explore the Railroad Museum of New England. I had first heard about this place at the Springfield Train Show (a good reason for museums to exhibit there), and the brochure looked compelling. It was only about 2 hours from our house. 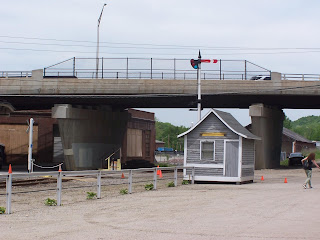 It is located right off a busy road and underneath a bridge, which isn't exactly a photogenic location. I get that sometimes you have to accept what is offered to you, but it is hidden in a river valley and hard to see unless you know it is there. That being said, once we were parked and able to walk around it got more enjoyable. The first thing you see (at least if you don't drive off the bridge by mistake) is a large station and then some train equipment parked outside. They call it a museum but aside from some pictures and models inside it really isn't a museum. It doesn't seem laid out to educate the public on much. However, as a train buff I knew what I was looking at and that was okay. 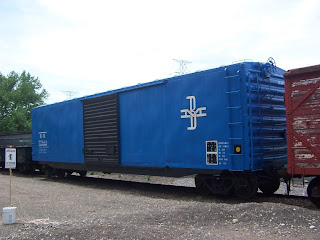 Their are about a half-dozen outdoor pieces of equipment (engines, cabooses, boxcars, a crane, etc.) including a blue B&M boxcar that I really liked. I think the paint scheme is really sharp and am glad it fits in my modeling era. They own a lot of equipment, as during the train trip we passed at least two dozen more freight cars, coaches, and engines more cars in various stages of restoration/neglect. Admittedly, it was pretty depressing but it is a small museum in a bad location. With all that equipment, they should be in a larger area where it can be seen and appreciated more. Since only 6-8 pieces fit on the display track at the station, the conductor said that they occasionally swap out what is out there. 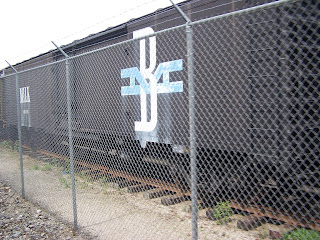 They also had a B&M milk car in their collection and when I looked at satellite pictures it was shown to be displayed at the station. Sadly, it was not. I asked the conductor who told me that it was moved to their maintenance area to allow the museum easier access to empty its contents. This was unfortunate because for my NMRA "Cars" certificate I wanted to scratchbuild a model of it. There are lots of online pictures, but I was hoping to get some myself. By luck I snapped this picture on the return trip and I couldn't believe I got the timing right. It looks pretty bad now, though I think it was restored and painted only about 15 years ago. 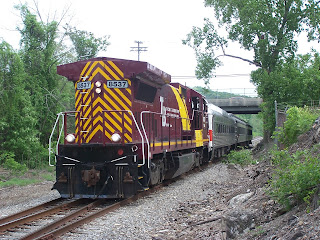 The website showed a train of vintage coaches pulled by an F-unit, and I was excited because I have never ridden behind one before. They also have RS-3 engines and some other vintage equipment shown on the web too. I was disappointed when our train pulled into the station. The ride was pulled by a modern diesel engine and consisted of a Budd RDC (which had air conditioning, no doubt the reason for its inclusion) and two antique coaches with open windows. We chose the later as we like the breeze. The cars definitely showed their nearly 100+ year age, but they were comfortable and when the train was moving it was nice and cool. 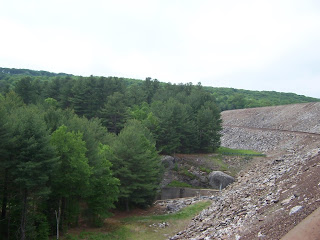 The 2:00 PM ride consisted of traveling south to Fascia's chocolate factory, getting off and laying over for about 25 minutes when they ran the engine around the train, then going north past the station to a large dam. Even though I ride trains a lot, I am always alarmed when the cars rock back and forth and this train sometimes moved at a good clip causing everything to shake. However, and at other times it was slow and serene. Due to a shortage of staff only one car had the conductor's commentary and after traveling the line I realize I would have liked to hear about the abandoned factories and stuff. Perhaps next time.

All in all, it wasn't my favorite train ride or museum but they have a lot of great stuff. They certainly have too much interesting rolling stock and engines for the one short display track at the station. It would seem to be a mecca for New England rail buffs, but you can only glance at it while rolling by it. Too bad they aren't in a larger location so that they could feature more of it.
Posted by DandHColonieMain at 6:20 AM