After leaving the WW&F, we headed through Wiscasset on our way to the next train destination. Though I am admittedly not a big fan of seafood and have never to my knowledge eaten lobster, a vacation in Maine and a trip through Wiscasset wouldn't be complete without stopping at Red's Eats for a lobster roll. While waiting in line, we met a great chap from Canada (Wendel) who was touring the USA. The 20 minutes in line went by quick and the weather was perfect for socializing and taking in the views. I ordered the fried haddock sandwich with cheese, lettuce and tomato. It was huge. The bun underneath barely held half of the fish and it tasted wonderful even though I ended up using a fork to enjoy it. My wife had the lobster roll and she said it was fantastic. Wendel had the lobster roll and scallops, which were huge (The scallops were as large as an Oreo cookie)! However, the real show stopper for me was their fried mushrooms. They were incredibly good.

Then, we lounged around on the pier in Wiscasset and took in the sun. While my wife talked with someone in the information booth, I looked at the ocean and noticed the remains of the pier where the WW&F came into town and interchanged freight with the Maine Central Railroad. By now, there was little left of the piers. as 80+ years of salt water had broken them down. 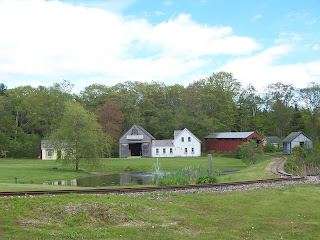 We then headed off to the Boothbay Railway Village. This was arguably the first restored 2-foot gauge railroad in Maine and was started by a gentleman who wanted to own his own 2-foot railroad (who doesn't?). He built some track on his property and over time developed it into a tourist attraction focusing not only on trains. The photo at right shows that the track follows the land, with sharp curves and steep grades.

As it currently stands, it is a restored village of sorts with houses, barns, a blacksmith shop a town hall from 1847, a chapel from 1927, and several train stations. Restored inside these buildings are treasurers from a collection of housewares (including dozens of salt shaker sets), antique firetrucks, and farm equipment. However, I came for the trains so I was focused on them. 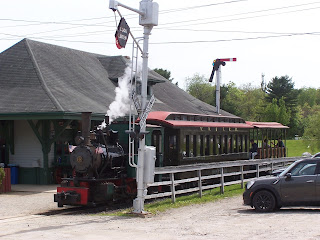 They have several areas with trains to see. There is an old porter and some boxcars and a coach under shelter. They have a room with an extensive train layout that really got the kids excited (though the loud music and noise from all of the running trains gave me a headache.) They had a barn focused on 2-foot trains, with models and pictures devoted to each of the five railroads. They had an old 2-foot train that people could play on and in. They had some exhibits such as a boxcar gifted from France after WWII, and a caboose. But, the highlight for me was the 2-foot gauge train that encircled the museum grounds. 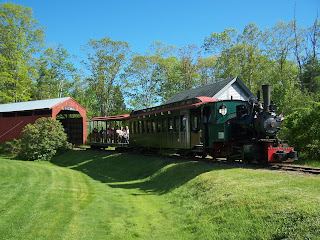 Surprisingly, the star of the railroad are engines that weren't built in Maine but originally were constructed in Germany by Henschel & Son. Boothbay currently owns four of them- two operating, one for parts, and one on static display- and a member owns a fifth engine under rebuilding. These engines were made famous in G scale by the company LGB. The train consists of a small coach that looks to be in excellent shape and which I suspect is a reproduction (it is too short to be an original 2-foot coach, likely a concession to the sharp curves at Boothbay) and a second car with benches.

The weather was perfect, so we chose the second car. The train runs around the grounds past the car barn, workshop, through a station, into a covered bridge, past a pond, and then back to the original station. The trip is two laps around, though during the second loop the train stops at the far station for 5 minutes if people want to get off or back on from an earlier trip. It saves about 5 minutes of walking, but is a nice touch. I chose to get off at the 2nd station to set up for some photo opportunities. While I was waiting for the train, I saw several frogs and a turtle in the pond. 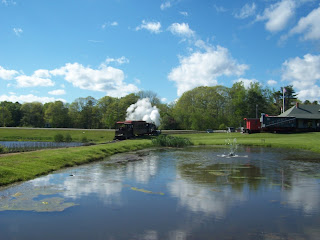 After the ride, we talked with the crew briefly (it was their last trip of the day, and I didn't want to hold them up from going home) and they offered to let me tour the shop the next day. Sadly, we had other plans. The gift shop was nice, but aimed more at the general tourist than the railroad buff. Sure, there were railroad things there but lots more "Maine" stuff in general. We heard about Moxie soda, and though they didn't sell it I vowed to find some to try.

All in all, I had a much better time than expected. I thought it would be a bit childish and to be honest, in parts it was. But, trains bring out the child in me so I don't mind. The train alone was fun to ride and though it didn't evoke feelings of riding in Maine it certainly was enjoyable. It felt like an amusement park train ride, but a train is a train. Since we passed this museum every day to and from the Inn where we were staying, I got to see the train depart multiple times. I wish I had an extra hour here to see everything, as 2 hours just isn't enough if you care to read and see it all.
Posted by DandHColonieMain at 6:38 AM