As I got ready to paint my building, I ran into a snag. From the one picture showing the south end of the structure, I knew that it said "SOUT..." but I couldn't see the rest. Did it say "Southworth", or "Southworth Machinery", or Southworth Tractor"? I couldn't tell. 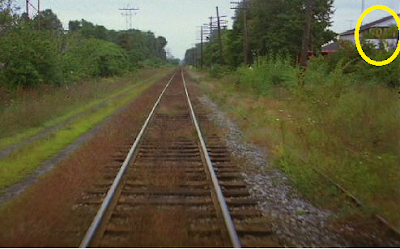 I planned to have custom decals made from Precision Design Company and Bill Brillinger (who did my Albany Tomato Company decals) but I didn't know what the lettering on the side was supposed to say. And it is long gone now. So, I called the old Southworth company (currently Gabrielli Truck Sales).

The first person there that I talked to was Chuck V., who thankfully didn't brush me off right away but instead tried to answer some of my questions. He then put me in touch with a woman named Bernice P., who had worked for the company from 1974 through 1990. I also was contacted by John H., who kindly sent me a couple of historical pictures (below) of the plant. Finally, Frank D., an employee who had started with them 50 years ago and still was with the Caterpillar company in its new location, reached out to me. Between the four of them, I was able to have my original question answered and in the process learned a whole lot more useful and interesting information.

The below picture is dated 1970 and shows only the word "Southworth" along the top of the building's wall. And of note: it didn't stretch from one edge of the building to the other but stopped above some of the windows below. I can't say why that was, but that is what it looked like then. 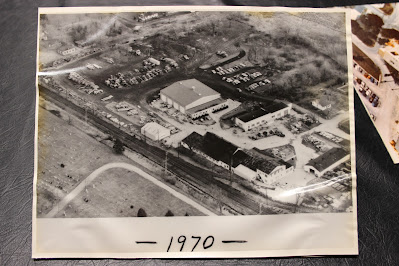 John wasn't sure about the date of this next picture but guessed either late-1970s or early 1980s based on the vehicles and equipment lying around. I then asked Frank D. and he confirmed it was done in the late 1970s. Note in the circled area that it says "Southworth" and "Caterpillar" on the ends, with each word taking up a full row. 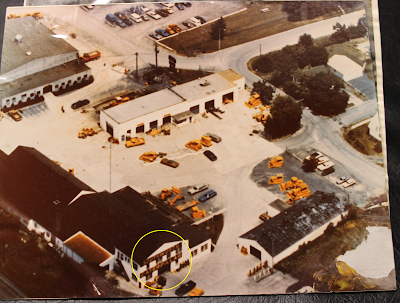 Now I finally had my answer, but it was a good news/bad news situation. Unfortunately, in designing my model I had compressed the height of the building between the large garage door and the upper row of windows. At the time, this didn't seem significant because I wasn't aware that I would need to fit a row of lettering between them. But now I was faced with two options: keep the model as it was and delete the "Caterpillar" lettering on the bottom row, or rebuild the model taller to accommodate it. This would require not only adding height to that office section in front, which wasn't the end of the world, but also raising all other walls of the building to maintain the correct proportion. That was the end of the world.

I didn't have the heart to do this, so sadly I went with the first option. That is one of the problems with historical research. Sometimes, you find out more than you wanted to know. Thankfully, few people will know of my dilemma.

With that decision made, I ordered the decals and will not prepare the model for painting.

I owe a TREMENDOUS THANK YOU to all of the people at Gabriellie Truck Sales and Milton Caterpillar who came together to provide me information, pictures, and other resources to help with this model.

Posted by DandHColonieMain at 5:21 AM