Who doesn't love the circus? Maybe me. I don't recall ever going to one as a child, though while in high school my youth group attended a Shriner's Circus. I don't remember much about it. I know the Barnum & Bailey Circus used to move from city to city by train (they had a "blue" train and a "red" train), and up until a few years ago those trains were the primary method of transporting the circus equipment around. It was a very long train, at least in my mind, made up of coaches for the employees and extra-long flatcars for holding various wagons and road equipment.

Here is an image of the circus train on May 31, 1987. The slide's location is labeled as Menands, but I can't place exactly where this shot was taken. The power lines on the left should be helpful, but the only possible location I can think of is facing south on the I-787 Exit 6 on-ramp. If true, there was some expert cropping to hide the old William Press building which would be directly on the right. That could be why the photographer framed the image as a portrait and not a landscape. 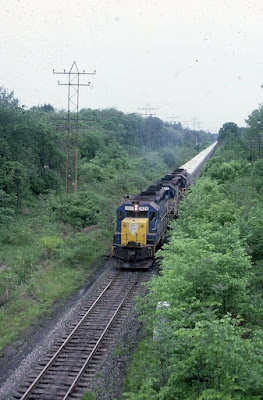 Regardless, it is interesting for several reasons: the train sure looks long, that it required four locomotives, and there are a lot of trees and growth in the area. For as industrial and commercial as the D&H's line through Albany way, some parts were still wooded and secluded. My "cut corner" section strives to represent part of this.

I do have my own story to tell about the circus train, however. On May 1, 2005, it was a wonderful spring day and I wanted to get away from my studies. I drove to the Port of Albany and came upon an odd looking set of coaches that revealed itself as a circus train. Passenger cars were parked on a couple of sidings (some with access ramps leading to their doors). Extended length flatcars were secured behind wire fences on the tracks alongside the warehouses where the huge transfer cranes are. 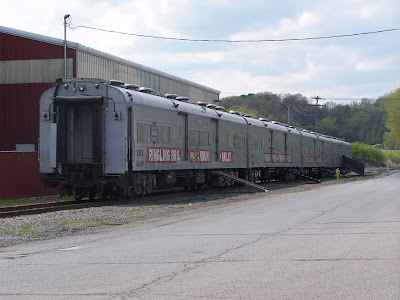 It is my guess that the circus workers actually needed access to these cars while they were parked, hence the need for the ramps. 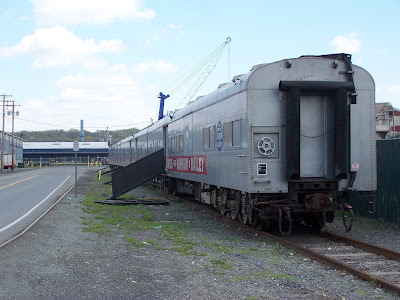 I don't know if this is the "red" train or the "blue" train, but the red lettering on the side of the car might be a way to distinguish them. 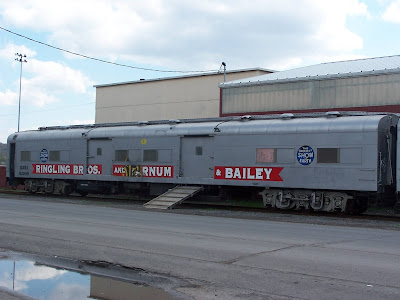 I also assume that the cars were parked on a siding with an access road nearby instead of in the adjacent rail yard because the Albany Port RR didn't want circus employees walking through an active railyard.

Some of the doors look to be non-factory standard. Those baggage doors sure look unusual, as do the windows on the sides. 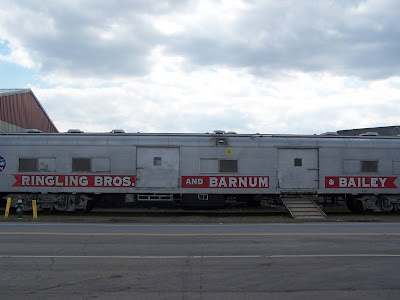 Behind the fences, 89' flatcars are ready and waiting for the call to be loaded up. 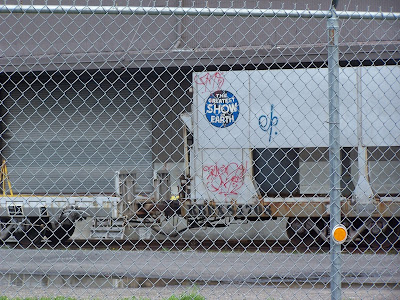 There were a lot of flat cars. 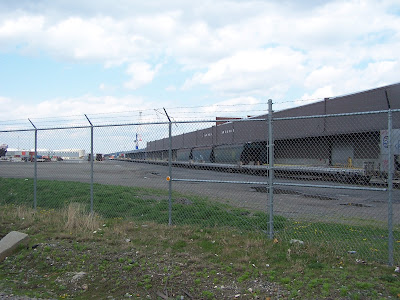 Sadly, the circus train is no more. It is a memory. I remember reading a couple of years ago how the train cars were to be auctioned off. I am glad I took the time to wander away from my studies and explore the port that day. If only I had known when they were loading, I would have cut class again. Oh well... 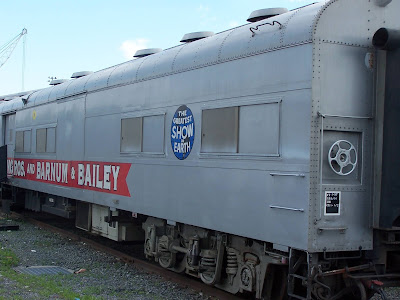 Posted by DandHColonieMain at 7:19 AM