The Delaware & Hudson's North Albany yard was right across the street from what is now Huck Finn's Warehouse, which was originally an extension of Montgomery Wards. Right across the street (literally) was Bridge Street, which cut across the yard on a small bridge that was supported by stone piers. This street was very narrow, though I think it was actually two lanes. I don't know how long it lasted as a thoroughfare but at least by the 1970s the bridge itself had been removed. Looking at the picture at right, it is hard to imagine how much clearance there was between the underside of the bridge and the railroad tracks beneath. The perspective from the camera view is likely misleading. 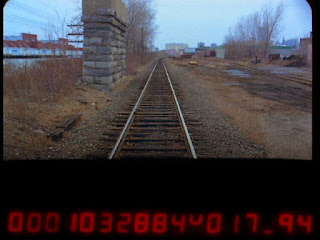 By 1984 at least one of the bridge piers had been removed, as had the road structure completely. But, at least one of the piers was left standing as a testament to the road that had once been there. Since one of the sections of my layout sections (the staging yard) is supposed to represent the North Albany yard I think it would be an interesting detail to build a bridge pier. You can also see in the picture the status of the railroad yard itself to the right... not much going on except that removing the tracks (thank you Guilford). But, all of that should make for an interesting and unusual scenic model. I can't wait to get started on it.

When I set out in 2010 to photograph and document what was left of the area, I had notations on some old maps of Bridge Street. But, I just couldn't see the road anymore (it was truncated on the east side of the tracks a bit) and there obviously was no bridge. However, it was July and there was a tremendous amount of brush. Over the years we have been to Huck Finns to buy furniture, to watch nearby fireworks, and in the winter my commuter bus sometimes goes by. That is when I saw the abandoned bridge piers. It is really tough to make out but in that pile of brush on the right is a pier. 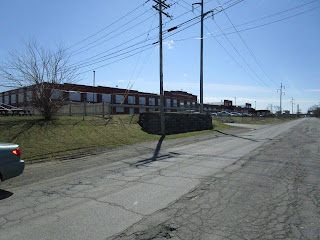 And, here is another pier right outside the entrance to Huck Finns. I always assumed that it was part of a stone retaining wall but that it not the case. Instead, I suspect that it is also more remnants of the bridge as well. This is just another example of why I find railroad archaeology so fascinating.
Posted by DandHColonieMain at 8:31 AM