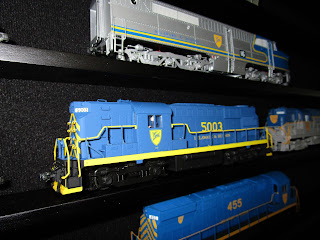 I love D&H #5003, a high-nose Alco RS11. It was the only high hood engine with full yellow chevron stripes on the end, which made it stand out and pop. I think it has become my favorite D&H engine (even more so than their Sharks, or PAs, etc... don't ask me why). It was a single engine paint scheme that lasted for a short period of time on the D&H, though it was applied to many of their short hood locomotives. Unfortunately, hasn't been offered commercially by Atlas, and the other sellers of RS11s (Proto 2000, Rapido, etc.) are not likely to do it either. Thus, my only option was to have it custom painted. 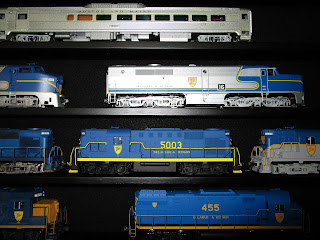 But, things have a way of working out. I was in a local hobby store (Milepost Hobbies) where Matt the owner is pretty good friends with a custom painter well acquainted with regional and shortline railroads in the North East. Some discussions were had, and before I knew it arrangements had been made to have an engine painted up for me. I just needed a donor Atlas RS11, and it had to be one of the newer ones with separate grab irons and such. The store owner then pointed to an undecorated Atlas RS11 sitting in the case for sale. How long it had been there wasn't said, but within a span of 10 minutes I had made contact with a willing painter who shared my vision and had purchased the exact model I needed.

And so I waited, though it only took a month. Maybe less, as I think I missed the first message that it was ready. And boy does she look great! The yellow sill is pretty bright but that will be easy to tone down with weathering, and like all other D&H engines this one wasn't immune to leaking oil, grease, grime, smoke, etc. It just hid better on the darker engine. And now that I have #5003, my wall of RS11 engines is pretty complete. I now have an example of all four paint schemes that still existed on the D&H in 1984 that I am aware of (though a lightning stripe scheme with faded or missing numbers might also be in my future).
Posted by DandHColonieMain at 4:25 AM