My layout, which sadly hasn't been featured much lately on this blog, is below a ceiling that is exposed with rafters and such. Dirt falls from it. I was hoping to have a drop ceiling installed by now but I can't get a hold of the General Contractor I planned to use. And, until that is in I don't want to do any scenery (or ballasting) of the track. And, I also don't want to store my trains on the layout where they will get dirty. 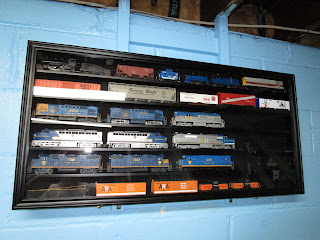 But, it is depressing to have trains just stored in boxes. All of my G scale trains are in boxes, as are my Lionel trains (except the ones I had out for Christmas, which are still waiting to get packed up!) and my American Flyer stuff. Boxes boxes boxes. I want to see my trains. So, for the past few years I have been looking online at display cases. They have to be strong, presentable, and have dust covers or doors (those three characteristics eliminate any D.I.Y. sort of shelf). One has jumped out at me over and over again. Amazon has HO display cases in three finishes (black, cherry, or walnut) for $100. Ebay carries the same line of shelves. I don't expect much from a $100 shelf, but it can't break under the weight of the trains or fail to open/close. Most other shelf options are more expensive custom jobs such as these from Trackside Displays that look fantastic but cost three times as much. I figured it was worth ordering one from Amazon and seeing what you get for $100. 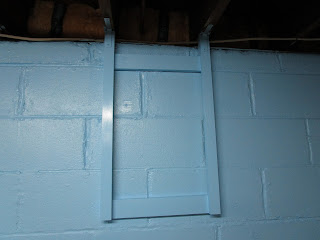 Since my basement walls are cinder blocks, I don't want to drill lots of holes in them. I don't want water to come in, and it is hard to keep the holes from crumbling and enlarging. So, since my rafters are still exposed I built a simple drop frame from 1x2" and 1x4" lumber and supported by angle brackets at the top. It cost less than $10 and once painted blue to match the walls is pretty innocuous. The bottom of the frame wasn't secured to the wall initially but it has a little spring to it, and I didn't want my shelf shaking when I was putting trains in it or taking them out. So, I ran a thick bead of Loctite adhesive (similar to Liquid Nails) along the bottom of the wood frame and pushed it into the wall. Once it set, the frame was stable.

The display case isn't bad at all for $100. The hardware isn't the best, though the latches on mine certainly keep the lid closed. And the lid is UV resistant plastic, not glass, which cuts down on weight and protects my trains from harmful UV rays. It came with a protective film that was easily removed. Despite Amazon saying it would have green shelf backing, it came with black backing that I like a lot better. The mounting brackets on the back (see picture) are pathetic though, and I quickly removed them. I planned to drill through the back of the shelf and screw it directly to the wood frame, but the back is thin particle board or chipboard. So, I used L-brackets that I had on hand and properly sized screws (in pre-drilled holes in the shelf) to mount it to the wall. The L-brackets are visible but I can live with that. It feels pretty solid now, and that makes me happy.

And now I can see my trains. Some are calling out to me to run, like my RS11s. Some still need weathering, like my PA1 and my C424. Along the bottom are some of my Arcade & Attica models, including some custom painted 44-tonners and a tourist gondola I detailed during my younger days. Along the top shelf are two engines in the blue & black paint scheme I adopted for my shortline Rochester and Western Railroad. (I developed that paint scheme independent of Montana Rail Link, though I am sure both were inspired by the Burlington Northern). That Erie Lackawanna GP50 was my first HO train, though it can't move now as the motor is burned up and the shell is in pretty sorry shape. Various other sentimental pieces adorn the shelves too.

Do I love it? Yes I do! I can now see my trains whenever I want. I can (theoretically) pull them off the shelf and run them instantly. And I can show them to my friends. Sure, the shelf spacing is very tight so if you frequently take stuff on and off it probably will be annoying. And I wish it were slightly deeper. But I think it is great. So great, that I have another display cabinet on order right now! I need it... my three RS36s are currently in the mail to Elgin Car Shops for detailing and weathering and eventually when they come home they will need a spot to go.
Posted by DandHColonieMain at 7:30 AM