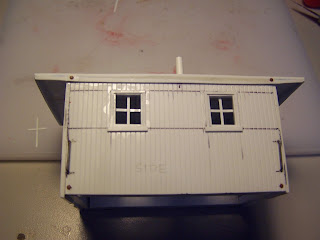 Breaking the project into two components: the body and the frame/chassis, I decided to focus more on the top half first. This was a very simple caboose and there were only a few exterior details on it. There are vertical handrails on the sides by the steps (but none on the ends themselves attached to the body), as well as some nuts and bolts in the upper and lower corners. While at the hobby store, I came across a display of Tichy nut/bolt/washer castings and bought some. Where have they been all my life! While I hoped to be able to scratchbuild everything on the caboose, I realized that I couldn't replicate these as well as the castings. 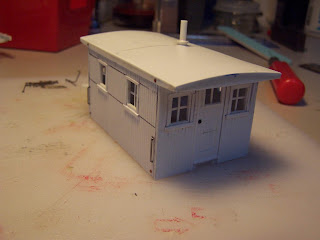 For door knobs, I looked around for suitable pins or track nails but couldn't find anything I liked. But, a package of Peco track pins worked perfectly and now my O scale figures can turn something to try and get inside. Incidentally, I now have a lifetime supply of O scale door knobs! My local hobby store was out of suitable brass wire for the hand rails, so I bought some piano wire. Even with special hardened cutters, it was no fun to work with so in the end I dug in my parts box for some Athearn HO blue box engine handrail stanchions. They are flattened instead of round, but bent easily and I think they look fine. I couldn't use MEK to secure them so I relied on superglue. 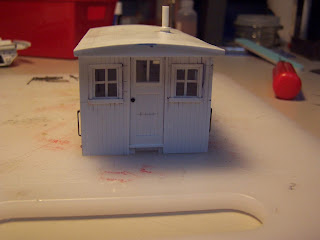 I next worked on the windows, which had previously been framed on the exterior, needed their cross pieces installed on the inside. Using some really thin styrene strips, I built up a bunch of 90-degree crosses on a piece of graph paper to ensure squareness. Once cured, I trimmed them to size and secured them into the window openings on the inside. Because the two pieces overlap by 0.015" (the thickness of the styrene), they don't lay perfectly flat. I had to apply MEK and hold each end down until it cured. They look slightly rustic, but since the whole caboose does I am okay with it. If I mount glass on the inside, it might push the cross pieces even flatter which would be okay. 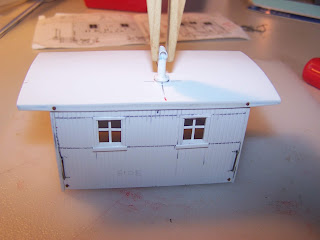 The smokestack was made from four pieces of styrene. The main shaft is a piece of solid 0.125" diameter rod. The flange on the bottom of it was made by first drilling 1/8" (0.125") holes in some 0.040" thick styrene and then punching out a circle around those holes with an ordinary hole punch. After selecting the best one, I inserted the rod into the hole in the flange and glued it. Once cured, I gently filed a taper on the top of the flange. The base of the smoke jack is a 3/16" diameter tube that I cut at an angle on my NWSL Chopper to match the roof curve. It was then glued to the bottom of the flange. After careful filing of the base to match the contour of the roof, the assembly was glued in place. MEK was flooded into the joints and it softened them and blended it all together nicely. The cap which keeps the rain out was bent from some 0.015" thick styrene. 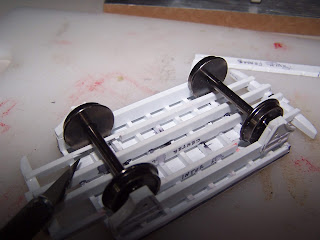 While everything cured on the body, I turned my attention to the chassis. I had previously cut away portions of the long stringers to clear the backs of the wheels, resulting in large gaps. I don't know how much this affects the judging of models, but I thought I could do something to minimize the gaps. So, using some 0.015" thick styrene that I cut into strips I carefully positioned pieces on the bottom edge (or top when the chassis is flipped over) and sides to match the areas. I made sure that the pieces didn't interfere with the wheels' rotation. If you look where the knife blade is in the picture, you can see one such strip in place. 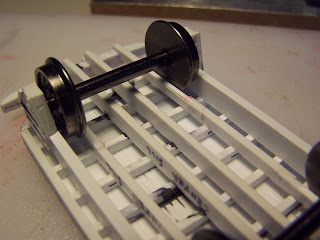 Once both pieces were in place for each wheel, it looked pretty convincing. The area is extremely delicate but I can't imagine how they would be damaged in any way. All four have been done in the picture, and the joints are barely visible. The one in the upper right corner has hairline air gaps between the pieces but they will get obliterated once the chassis is painted black. The other three don't even show at all. I think they look a lot better now, but it is the type of thing you probably don't point out to a judge in the first place. Either way, the overall lesson is that even when you build a model from plans you might need to make adjustments along the way. 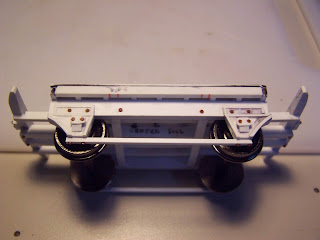 Next, I flipped everything over and worked on the frame some more. I carved off the crude nuts and bolts that I had previously made with square styrene and installed nut/bolt/washer castings everywhere the prototype had them. I also build up journal boxes and covers with styrene (they are for looks only, as the axle end doesn't protrude from the styrene beneath them). I also added the horizontal cross brace between the bottoms of the axle boxes and the cross braces for the brake hangers. These are necessary for hanging the brake gear, and I think I found a pretty nifty way to make them. It is now somewhat "fragile," but my mentor said that award winning models are delicate. 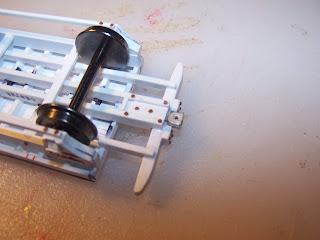 Finally, I decided to do something for the couplers. I don't think carving a pair of link and pin couplers would be terribly difficult but I first thought I would see what castings are out there. I found a lovely set of Wiseman Model Services O scale link and pin couplers that looked great. However, upon arrival they were too big for my car. So, I then ordered their S scale set which fit perfectly. You can actually install them in a Kadee coupler box to give them some swing but I glued them into a coupler box I fabricated from styrene and n/b/w castings. I am not sure how strong the white metal is, but for a display model they are perfect.

I still need to tar paper the roof, build the roof seat for the brakeman, add the brakes, and then build the steps, end platforms, and railings. Quite a bit to go, but I am pleased with the progress.
Posted by DandHColonieMain at 8:39 AM