Each switch machine needs a toggle switch to control the points, and I have seen them done in various ways. Having them protrude from the fascia is just asking for trouble, and making special bump-out protectors looks clunky. I wanted something low profile. I found a vendor selling DPDT, on/on (no center off) rocker switches on EBay for about $1.25 each. They are round, so installation is as simple as drilling a 5/8" mounting hole. And, I can orient them so that the little white dot on the switch indicates the primary flow of traffic through the switch, giving an easy visual cue as to whether the switch is set correctly. Finding a source for them took some doing, and I ordered a bunch in case I can't get them in the future. 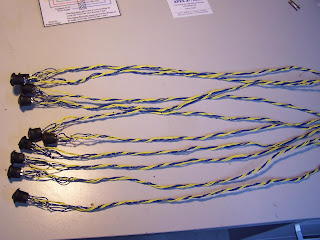 The toggle switches were pre-wired at my workbench while I was sitting down and listening to music. Otherwise, it would get very tedious (it still was). For my ten switches I needed to make 70 total solder joints. And, I had to be neat because the wiring has to slip through a 5/8" hole from the front instead of back-loading as with typical toggle switches. Some of the solder joints for the criss-crossed wires looked a little too close for comfort, so I tried something new and used liquid electrical tape. It stinks, it is thin, it drips everywhere, but it peels off cleanly once cured. I did two coats as recommended in the instructions. I also twisted the wires for neatness. Each switch has two feet of wire... surely excessive... but a much better alternative to splicing longer wires on later. 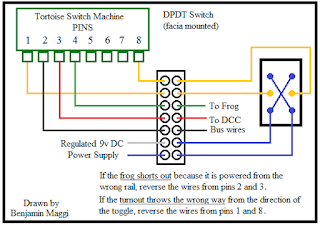 To keep everything consistent and avoid screwups, I drew up exactly how I wanted the Tortoise machines wired and then printed it out and laminated it. (Side note: once you own a laminating machine, you will use it for so many things!). Though I could wire the machines directly to the bus wires, installing an intermediary terminal strip is a good idea should you need to remove a Tortoise for maintenance (or, as it turns out, if you need to replace a switch itself... grrr). Another option is edge connectors, but they are expensive. 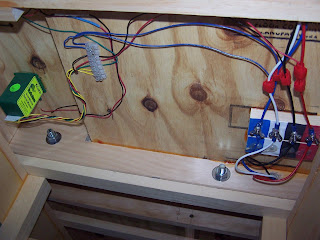 I also ordered some of the "European" style barrier strips, which perform the same function as a terminal strip but are much easier to use. You just stick the wire in and tighten the screw. Sometimes I found that the wire wouldn't get caught by the screw and would pull out after I tightened it up, or the wire would go too far into the terminal and the screw would clamp down on the insulation part. Occasionally, the metal insert would become dislodged inside and the only way I could manage to get it in the right place again was to remove the barrier strip from the benchwork. However, they were indeed much easier then bending each wire around a screw while upside down.

However, they also essentially double the amount of wires necessary for each switch machine. If I didn't power the frogs, I think I would only need two wires going to the Tortoise. However, because I am powering them I needed an additional 6 wires. And, since the barrier strip was already in place I ran the power bus wires through it too for a total of 14 wires. Suddenly, my layout's neat underside has become a mess or wires. I plan to purchase a wire stapler to keep them organized, as the regular staple gun I have sometimes compresses the wires too much.

That being said, it wasn't a difficult job to wire up. I designed the layout sections to easily be disconnected and flipped on their side for wiring. While that is probably still true, I haven't done it because I am happy with how everything is aligned and don't want to ruin it. Unfortunately, the layout height is just perfect underneath so that I cannot sit on a chair (I hit my head) or lie on my back (too far away). I must hunch over. So, I do a couple of wires at a time and take a break to do something more interesting. To those who solder wires under the layout in situ, my respect to you! 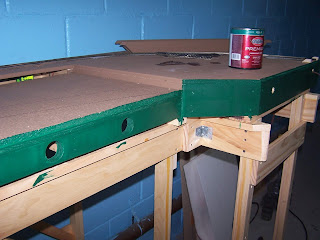 I think toggle switches look better when they are recessed in the fascia. So, even though my rocker toggles don't extend very far out I cut a 1.5" hole where I wanted each switch. I couldn't always get them lined up exactly where the track switch was (because of the benchwork braces or it was too close to the end of the section) but it is quite obvious which toggle controls which switch. Then, the holes were sanded and given several coats of a dark green paint. No, it doesn't look perfect but this isn't the finished fascia either. Once my scenery is in I will cut masonite into strips and attach them to the benchwork edge. For right now, this is temporary. And, eventually something will conceal the bare pine benchwork. 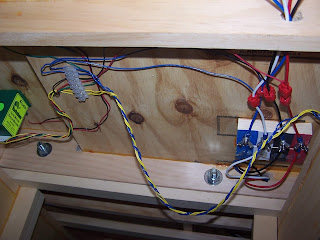 Next, I used some 3/16" plywood squares (which I bought on Ebay because I don't have a table saw) and drilled a 11/16" hole in the middle with my drill press. After painting them green and gluing them to the backside of the benchwork, the toggle switches slipped in from the front and they were then connected to the terminal barrier strips. I made sure the little white pip was pointed the way I wanted it. Then, each toggle was tested to make sure it threw the track switch the correct way. Once that was done, I did one more test to make sure the frog of each switch was powered with the correct polarity in related to the position of the point wires. Amazingly, not a single frog was wired backwards! 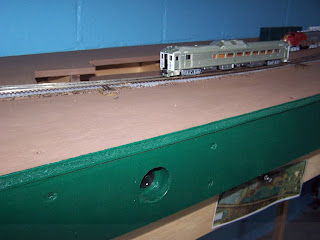 Phew, it was a lot of work. More than once through the project I thought about gutting it all and using ground throws and unpowered frogs. That would reduce the amount of wire tremendously (and I plan to do this with my last side, the staging yard). But, I am happy with the results and it is pretty neat to flip the toggle switch and see the track points change.

To fully check everything on the layout was wired correctly, I took my newly acquired Boston & Maine RDC out for a spin. For the most part it operated fine, and I am happy to be finished with this wiring!
Posted by DandHColonieMain at 4:26 AM