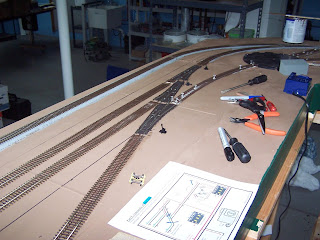 My conceptual goal for this section has been slowing evolving over the past 9 months. Where as once it was going to be a throwaway section, complete with some track work features (turntable, engine facilities) that were being installed solely for my NMRA certification, I have come to terms with the potential of this section. As I have described previously the yard located in North Albany (that is sadly completely gone now) that also served as a sorting area for at least half a dozen local industries. In 1984, much of the track still existed though within a year or two Guilford had removed nearly all of it.

There is something terribly fascinating and depressing about seeing old, abandoned track. And, because it captures the mood of 1984 so well I plan to model it on my layout. However, like nearly everyone else, putting a yard (even a small one like this) would waste a lot of space if used solely for marshaling freight cars into trains. So, I am also focusing on the scenic potential of it. 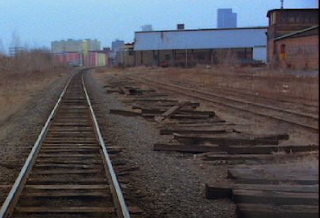 Unfortunately, the yard is oriented west of the mainline which means on my layout that always has west in the back (and north to the right), the yard should be behind the main. That just isn't possible with my current arrangement. The yard will be extremely short (the entire section is only 4.5 feet long) and the yard ladder has to fit on it. So, it had to be selectively compressed. I started by laying down a layer of foam that I purchased at Hobby Lobby. I hate foam for this purpose as it is squishy and I fear the ballast/glue layer cracking while cleaning track, but this stuff is so thin that it should be okay. It is even thinner then N scale cork, so it really will allow the track to look buried in the weeds. 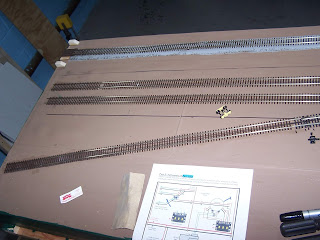 I went back and forth arranging the turnout ladder and to get the longest possible yard tracks they had to come off the main at an angle. But this didn't look like the prototype, so I made the first two tracks parallel (a layout planning no-no if ever there was one). I did leave space for a track between the yard and the mainline though, which I will model as roadbed and ties without rails in the process of being torn up. The closest yard track needs a switch coming off of it to go to the turntable and engine facilities. This is purely for my NMRA requirements, and once they are earned the switch will be removed. I may then add add a fourth yard track that is not connected but also just ties with rail torn up. 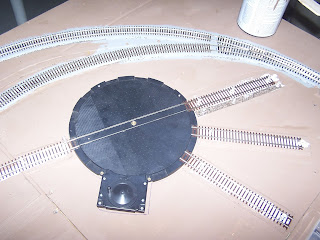 The turntable area was a tight fit and I needed three stall tracks for my certificate. If I were designing this layout section to be permanent, I would never have crammed it in this way. There were a lot of crazy elevation changes in this section, as the mainline uses 3/16" cork, the siding coming off transitions down to 1/8" n scale cork, and the turntable has a molded base of 1/4" for when HO cork roadbed use to be that thick. Shimming with card stock was required here and there, and my adhesive of choice now is Aleene's Tacky Glue (the stuff that comes in the gold bottle). I glued everything down except the turntable, which is screwed down. Since this is temporary I didn't go crazy with the glue. 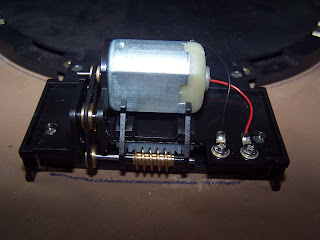 The turntable is powered with the matching Atlas motor. I assumed that the motor would have a socket that fit over the shaft that comes up and is used for the hand crank but I was wrong. In fact, I had to read the instructions three times to fully understand what was going on. While skimming them I became concerned that I had bought a turntable which couldn't be powered and got upset. However, after reading the instructions I saw that you simply broke off a cover on the back of the turntable and the motor gearing meshed with that. A pretty snazzy set-up, Atlas. The whitish/clear gear behind the brass worm gear is part of the turntable itself.

And with that, track laying on my layout is complete. I still need to wire this last section up, and connect the ground throws for the three switches (no Tortoise machines here... and perhaps no powered frogs) but it is with sadness that I conclude laying track. However, I can't wait to start some scenery and ballasting!

Posted by DandHColonieMain at 8:17 AM