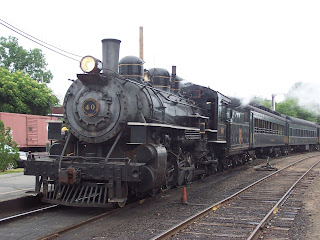 It has been awhile since I worked on my layout but I have still been busy. Two weeks ago, I was at the Adirondack Live Steamers (1/8 scale, 7.25" gauge) for their Spring Meet. I have been a member there for years and the weather was perfect. Last weekend, I went to visit my friend Joe and his 1" scale (4.75" gauge) steam railroad in his backyard. And this past weekend, I went to Essex to ride their steam train and river boat. And, in the background I have been scratchbuilding a caboose as part of my NMRA certification. So, a lot has been going on behind the scenes and I will probably discuss some of it in future posts. 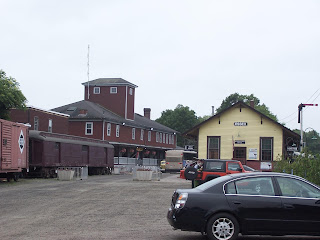 Essex proved to be enjoyable even though the weather was lousy. It rained off and on all day, it was cold, and the boat was crowded. However, a bad day behind a steam locomotive is still better than pretty much anything else and I managed to get some pictures from the day. We rode the train as part of a group from our NMRA Hudson Berkshire Division, and we had half of a coach reserved to ourselves. The other half was reserved for a church group. Because the train is run as part of the state park system, everything was in excellent shape including the buildings, the outdoor displays, and of course the train equipment. 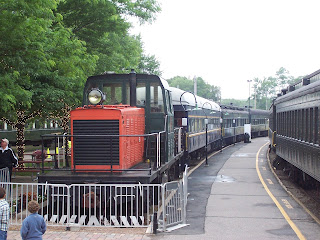 The railroad owns four different 80-ton, center cab switchers. I have an affinity for all centercab engines, in no small part because the Arcade and Attica Railroad owns four themselves (two 44-tonners, a 65-tonner, and an 80-tonner). Two of their engines were out when we were there, and one was connected to a lunch train they were running. Our train was next to it and we were able to look through the windows and see the linen and fine china settings, the flowers on the table, etc. It would be fun to do in the future with my wife, but alas it is two and a half hours away. 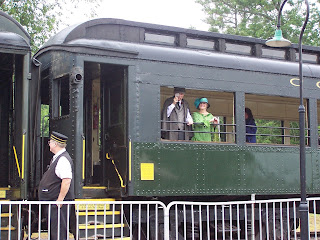 The river boat trip was a big disappointment for me, mostly because of the rain. However, my wife and I normally love open-air cars and despite the weather I think we would have enjoyed riding in the open-window coach. It looked to be a regular passenger car with some of the windows removed and security bars in place. Our group was 6 coaches back and traveling between the cars wasn't permitted, so we never got to go to the open car. Maybe that was a good thing, as there were some strange doings going on in there! 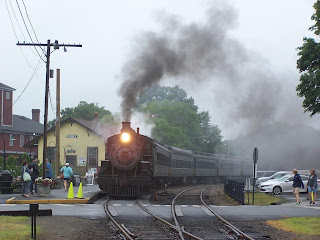 All in all, though, I had a good time. I had been let down a bit with the Railroad Museum of New England excursion a couple of weeks ago and had high hopes for this place. The train itself was wonderful (I wish all tourist trains had state funding to keep the track work and cars in tip-top shape) and the steam engine was pretty cool. Our train was nine cars long which seemed like a lot, but the sure footed consolidation handled it well in the rain. Though the trip was about 20 minutes each way (much too short in my opinion), it was an enjoyable way to spend an otherwise wet, gray, Saturday afternoon.
Posted by DandHColonieMain at 9:40 AM