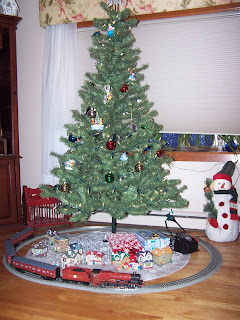 Merry Christmas to all of you.

A tradition at our house (especially since I didn't have a layout for over a decade) is to put a train under the tree. My wife and I have fallen in love with the O-gauge "Hogwarts Express" from Lionel. Not only is it a pretty train, but it is based on a series of books/movies that we like AND it is British. It really looks festive with my wife's little town set up under the tree.

Oddly enough, Lionel included with the set O-36 track (which means the track forms a 36" diameter circle) and it is too tight for the train. The pilot wheels rub against the cylinder, wearing it away. I substituted 0-48 track that allows the train to look and run better, though it takes up more space under the tree. One year I had the O-36 and O-48 both set up and ran it with my ZW transformer, which was pretty awesome.

Posted by DandHColonieMain at 5:14 AM