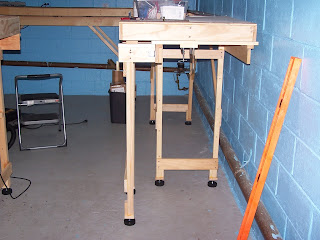 So, I was doing some preliminary studies of how I was going to span the 2.5-foot wide gap in my layout and decided to use my four-foot level to see where everything stood. And, lo and behold, the corner section was sagging in the area where there was no benchwork to support it. It was only about a half of an inch or so, but I figured it was time to correct it. I had a couple of options, and the easiest would have probably been to bolt the other side of the corner section directly to the frame so that it couldn't budge. However, as I wanted my sections to be portable I instead set out to build a support leg for the overhang.

So, I bought about $6 in lumber and brackets and built a complete leg assembly. I also built two L-girder sections that were a little over 8" long. I had to set the legs up for the hockey puck leveling adjusters, but that was pretty simple. Then, the leg was bolted to the existing framework, leveled, and we were good to go. 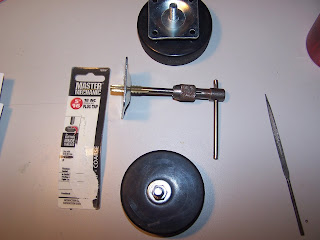 Under the "nothing is easy" theory, it took me a lot of time to do this though.  I needed bolts which are 2" long carriage bolts. I drove up to Tractor Supply and bought several from their bulk pay-by-the-pound section but only bought 2.5" and 3" long bolts, not the 2" required (I didn't write down what I needed before I left). So, I had to go back on another day and drive another 40 minutes round trip to by $0.47 worth of bolts. I also had to order the threaded brackets again from Ebay, and wait for them to arrive. They don't come fully threaded (no idea why) and last time I had a friend do it but I wasn't going to see him for a while. So, bought a 5/16-18 tap online, but the seller sent me a 5/16-18 die instead (used for threading bolts, not threading holes), so I had to deal with the hassle of returning it and then getting the correct tap.

Oh well, it is done.
Posted by DandHColonieMain at 10:07 AM