I am finally on the home stretch, which is good because my layout itself is calling me.

I did the trucks first, mainly because they looked simple. I first drilled a hole in a small scrap of styrene and threaded the mounting screw through it and then tightened it up, giving me a convenient styrene handle to hold. Everything was given a spray of flat black paint. I removed the paint from the treads with some lacquer thinner and a Q-tip (some day I play to purchase acrylic wheel painting masks which protect the treads from paint overspray). I then disassembled the trucks and removed the wheels and used a microbrush to paint the faces with brown paint. I also painted the backs of the wheels and the axles mottled brown/black paint. In my opinion, many a good picture has been spoiled by unpainted axles shining under cars. Finally, I drybrushed the sides of the trucks with brown to represent a light coating of dirt. The WW&F kept the car in good condition, but some dirt is inevitable. A spray of Dullcote sealed it all up and lightened the drybrushing, making it blend in better. 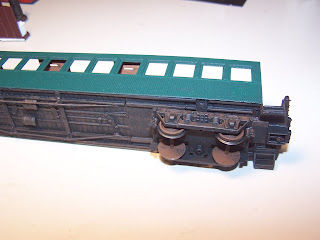 The underframe was tackled next. I didn't prime it first but instead sprayed it with several light coats of gloss black paint. There were a lot of nooks and crannies underneath and I didn't want to flood it with paint, but some areas stood out in bright red and required frequently passes with the spray can. I was hoping to find Satin black at the store, but they didn't have any. The gloss turned out a bit too shiny (duh) so I lightly sprayed over it with flat black. Then, I drybrushed it with brown and sprayed it with Dullcote. The floorboards on the vestibules were a worn wood that appeared gray, which I painted separately and and then weathered.

This is another time when I regret not taking a single detailed picture of the coach even though I knew full well I was going to build a model of it. I was just so excited to ride the train and I completely forgot. Grrrr! 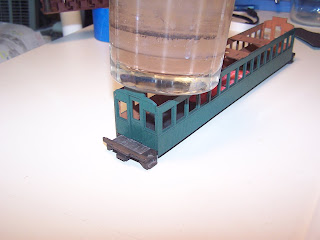 I then assembled the body to the chassis in stages, starting with the middle. No matter how hard I tried I couldn't get everything lined up perfectly in one go. The frame had a slight bend to it and had I tried to straighten it I feared the superglued joints would crack. To make things easier, I "popped" the weight off the frame by flexing it and the superglue released easily. I also sanded some areas of the frame a little more to let it slip into the body easier. Then, I superglued the middle of the car and let it cure. After a while, I did one end and finally the other. Adjusting the amount of water in the glass varies the amount of pressure applied. It came out fine. 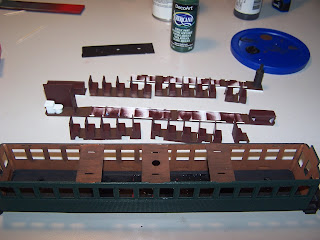 Along the way, I realized slipping in the interior in one piece would be impossible with the three upper roof braces, I was supposed to slip it in before gluing on the body but it got in the way. So, I cut my interior up into smaller bits. This is how many of my projects go... I spend so much time getting things just the way I want them and then a problem comes up and I need to back track a bit. Oh well, it is just plastic and easy to cut. How I will fit them in, as well as install window glazing, remains to be seen. But, it will happen sometime down the road and not now. 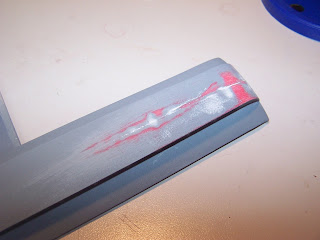 The roof was given several light coats of gray primer, which revealed some roof joints that required a little more attention. However, some more white putty and sanding cleaned that up pretty good. As to final color, there are some pictures of the car (perhaps when it was new?) with a black roof, with the clerestory portions surrounding the glass painted green to match the body. However, the coach currently has a reddish roof that is now nearly black itself from the soot of the engine. It still has the green clerestory areas around the windows.

Internet pictures show that the amount of red or black on the roof varies, perhaps because they repainted it or washed it? It also looks like it had a canvas or tar-paper covering. I don't plan to model the covering right now, but had my hacking apart and rejoining of the roof sections looked terrible I could always have hid it under that! 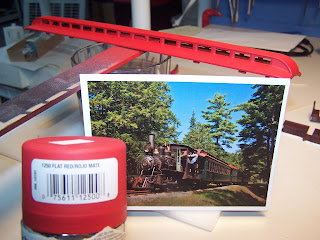 I looked for a can of spray paint that was close to the red color of the roof at Lowes but came up empty. So, I went to the hobby store with a postcard from the WW&F showing the coach and lo and behold there it was... a can of Testors red paint. When I initially sprayed it on it went on glossy and bright red, which was NOT what I wanted. When I checked on it the next morning though it was perfect. Perhaps it is a tad too bright right now but there will be weathering applied which will darken it and tone it down a bit. The fact that the roof was originally painted in bright red by Bachmann is a bit of irony that hasn't escaped me. It almost looks like I haven't done anything to it. 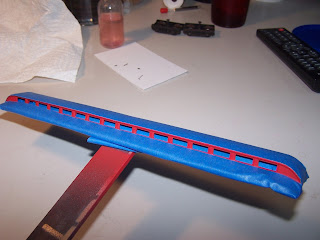 I thought the green clerestory areas would be tough to do with clean separation lines, but since it is all heavily weathered I might have been able to hide any rough edges. I bought a bottle of craft paint that matched and tried to paint the areas. I got about 1/2" in and realized I couldn't do it. No brush could get in the cracks easily, and it wasn't going on smooth. I needed to spray it. So, I washed off the paint and after it dried masked the whole roof with blue tape. Then, a couple of light passes of the green spray paint and it was done. And you know what, it came out really good! I did a little touch up of each color by spraying the paint into a paper cup and then brushing it on, but on the whole I was very pleased. 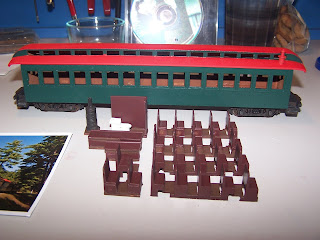 Still, it would be nice if D.R.L. offered a wooden overlay in their kits that had the clerestory cutouts which could be painted green and then glued into the Bachmann roof. Then, it was time to weather the roof. It was at this point that I started to question whether I should just leave the roof bright red. However, it looked like a Christmas train at this point and I decided to press on. I sprayed it first with a light coat of Dullcote to tone down the gloss green in the clerestory areas and also give the weathering medium some texture to stick to. 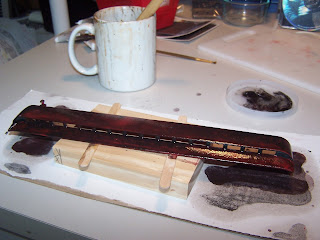 I like weathering with oil paints. I have tried alcohol/acrylic paint washes but I find that they sometimes dry blotchy, they turn the Dullcote white, the alcohol sometimes lifts the paint from the car below, and when I try and layer washes to build depth previous weathering layers wash off. So, I went with oil paints. I squeezed some black straight out of the tube onto a plastic paint dish (yogurt lid) and used a large brush dipped in odorless mineral spirits to dab it all over the roof. I then gently blew all along the roof to help distribute it. More applications of oil paint and mineral spirits helped give more even coverage.
Some areas came out better than others, but with oil paint you never know until it is dried. It matches the real coach. 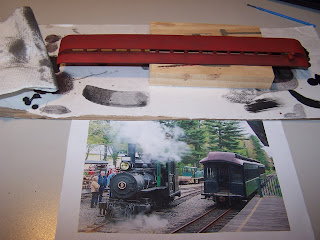 Update: I printed out some pictures of the coach and realized that while it had a nearly black roof a couple of years ago, now it is mostly red with a light coating of soot. When I blindly showed some pictures of the coach to my wife and asked which she preferred more, she told me she wouldn't have noticed the difference without me poinint it out. That being said, she preferred the red one more. I did too, so I took lightly misted the roof with the red and let it dry. Then, to replicate the effects of soot I took some of my finely ground real coal and rubbed the powdery residue all along the roof. Several applications of this built up the color I wanted. (Yes, if I had black chalk I might have tried that too).

Right now, I am happy with it. There are at least eight coats of gray primer, red primer, dull coat, more red primer, and more dull coat on the roof, and I am quitting while I am ahead!

I then prepared the decals for installation. Man, those gold stripes are a real pain to install! No matter what I did, they just ended up shredding. Perhaps they are old? Also, the lettering isn't spaced right for the "full length" car so I will reach out to D.R.L. to see what they recommend. I would hate to have to cut each letter up and apply it separately. I need to sit back and think. But, I did install the car numbers, which is a small victory.

Posted by DandHColonieMain at 7:02 AM