Though this is the first area that a northbound train would encounter on its way out of Kenwood Yard, it will likely be one of the last sections to be built. In fact, it likely will be divided into three different areas. The first is the Central Warehouse/Albany Tomato Co.; the second is the North Albany Yard; and the third is the team tracks and Surpass Chemical area. If I do model this area I will likely chop it up into separate sections as the latter two are the ones I care about most. 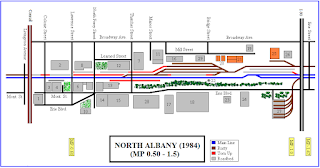 Based on the photos from 1984, I was able to accurately determine just what tracks existed at this time. See the diagram I drew up, in which north is to the right. Blue lines are the D&H main line, brown lines are tracks that existed but were badly rusted, red lines were where tracks were in the process of being torn up, and gray lines were areas where the tracks had been removed and only the roadbed remained. The buildings are drawn as they existed then, though I am still in the process of identifying them. Some still exist today, others have been sold to new owners, and some are gone with only vacant lots remaining. 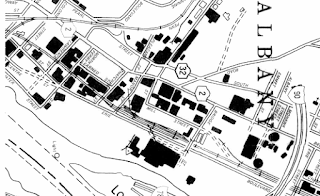 My research started here one blistering hot day in 2010 on July 4th when the temperature was in the mid-90s. As my wife was out of town, I found myself with the day free to go exploring. At the time, I didn't think to bring along an actual map so instead I hand-drew everything I came across on blank pieces of paper. Later, matching that up with a street map allowed me to put it all together. Later, I located a Sanford Insurance map (from 1972) which also proved useful.

As can be seen, even this area of only a half-mile is much too large for one modeling area, which might be between 6-7 feet. If my math is correctly, to accurately represent it would require a space of about 30 real feet. Instead, I plan to chop it up into three sections which running from south (left) to right (north) are as follows: 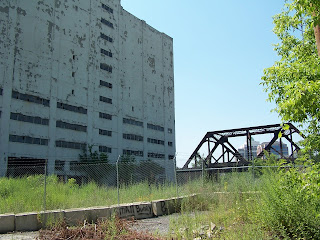 Geographically, this is the area between Livingston Avenue to North Ferry Street. By 1984 there were no active sidings in this area. The large Central Warehouse (building 1 on the schematic) sat prominently in the area and still stands today. Here, the D&H ducked behind it and disappeared, perfect for a staging yard exit. Just south of it, the NYC/PC tracks ran perpendicular and over the D&H before crossing the Hudson River on the Livingston Avenue swing bridge. There were several warehouses too, including one painted in a rainbow of colors. The Central Warehouse building is a prominent feature (some would argue eyesore) of the Albany skyline and will firmly set my layout in the Albany area.

But, there is one building featured in this section that I have to model. The Albany Tomato Company (buildings 3 and 4 on the schematic) received produce from the west and then repackaged it for local distribution. Big deal, you say. I would have agreed with you until I saw a beautiful picture of it in Len Kilian’s book and was smitten. The slide which was used for the book, which I have since obtained from Mr. Kilian, was taken by Geritt Bruin in 1963 and features the building looking stunning.

North Albany Yard (section #2)
Here was where the yard under deconstruction (or as Guilford liked to refer to it as, "rationalization") scene will be prominent. As noted before, few modelers have ever devoted so much time to modeling a yard that was being removed. This will be a good place to lay the track with separate wooden ties, lots of weeds, pieces of rail lying around, and plenty of dirt and junk. Just thinking about it is a bit depressing! However, because of the various stages of decay present the yard will tell a story of brighter times and busier railroads. The real trick will be to compress it enough that it looks like a small yard but doesn't eat up too much real estate. 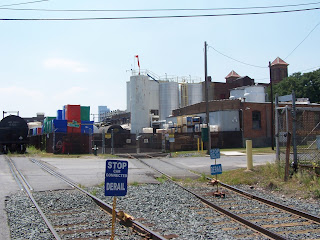 These two industries still exist today and receive cars, though the team track was rebuilt around 2013 into an oil distribution facility. When it was still a team track in the late 2000s, then known as Bulk Handlers, I drove around and took pictures. I don’t recall the gantry crane then and I don’t know if it still existed in 1984. The team track (building #27 on schematic) was built by New York in response to their removing the previous one at Madison Avenue as part of the I-787 construction. Team tracks allow for a variety of freight cars so that will be good for my layout. I love tank cars, so the Surpass chemical facility (building #20 on schematic) will also be a great choice for a layout.

I found the image below recently on Google maps, even though the area at the bottom was redeveloped in 2012 and turned into a petroleum tank car loading area. 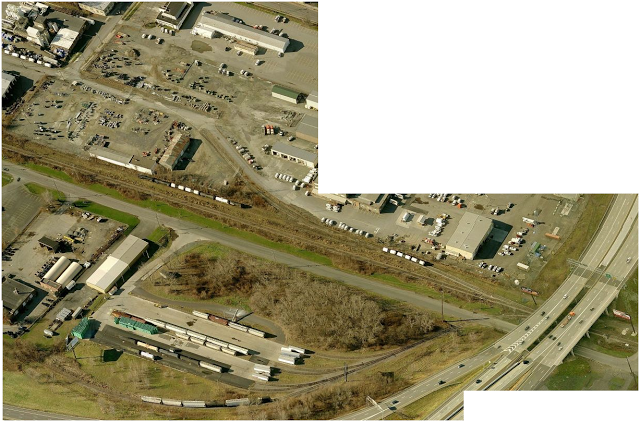 Posted by DandHColonieMain at 7:25 AM