Moving further north, one comes to a pair of industries that are about as different as you can get. Located on the west side of the tracks, which in case you haven’t been paying attention are one of only a few such industries to be modeled on my layout, this area will allow me to incorporate a bit of varied scenery and structures. I get the chance to see them both everyday on my commute home from work off while riding on Route 7. 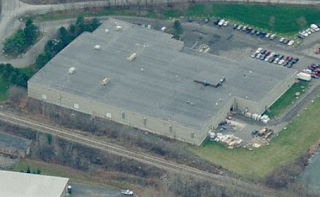 I don’t quite know when the original building was constructed, but seems to be from a later period of time then many of the brick and stone block warehouses that were in downtown Albany. This distributor was, according to Dominic Bourgeois’ research, a long-time customer of the D&H going back into the 1950s.  As such, I was pretty excited to incorporate this pair of sidings on my layout because it meant that I could actually model newer, better maintained track. I believe the pair or tracks were installed in the late 1970s, and while doing some research at the house of Tony Steele (a former D&H employee), his friend Greg Whittle who was also there overheard us talking and said “I designed that track and they never used it.” When I asked what he meant, he explained that Keis had been interested in getting better rates from the trucking companies that delivered beer to their facility and the presence of a railroad siding, and thus competition to the trucks, resulted in the trucks offering better rates.

So, did Keis ever receive rail deliveries on the new sidings? Were there other rail sidings before the new ones that allowed the D&H to service them somehow? If they did receive rail shipments in the 1980s, were they in refrigerated boxcars or regular ones? As of yet I don’t know the answer to any of these questions. What I do know is that the D&H sometimes used the sidings to store MOW equipment, and I may do so as well. Or, I may take some modelers’ license and switch the industry as if it did receive cars.

Both sidings still remain though the switch off the main line has been pulled. Perhaps the D&H thought that service might return so they left the barely-used tracks in place?

But is isn’t! From their website: “Norlite is a manufactured lightweight, porous ceramic material produced by expanding and vitrifying select shale in a rotary kiln. The process produces a consistent and predictable high quality ceramic aggregate that is structurally strong, physically stable, durable, environmentally inert, light in weight and highly insulative. It is a non-toxic, absorptive aggregate that is dimensionally stable and will not degrade over time.
Norlite offers designers solutions to the challenges of reducing dead loads, lowering thermal conductivity of building products, improving fire ratings, enhancing soils, and treating wastewater, just to name a few.”

I can’t explain it any better than that.

Per a 2013 article in the Troy Record newspaper, Norlite also has another distinction: “The business, which employs about 62 from around the greater Capital District, is the only entity of its kind in the state that has a commercially permitted waste incinerator which other businesses can use to dispose of their liquid waste.”… “Other businesses, ranging from Gillette to IBM, bring their waste to the site. And it is then transformed into fuel, specifically for the 25-foot flames in Norlite’s 180 foot long kilns.”
http://www.troyrecord.com/business/20131023/norlite-aggregate-opens-its-doors-for-an-in-depth-tour

From a modeling standpoint, this is a huge facility filled with towers and pipes and the like. I doubt I will attempt to model it all, and thankfully I don’t have to.

The actual railroad spur coming off the mainline is relatively short and curvy and almost perfect for modeling. Per the D&H Yahoo group I was told that the siding was longer but it had been reduced over time as the facility expanded and needed the real estate. Currently, it looks like it could probably hold 2-3 open top hoppers and, unless my research turns up something different, I will model it like that. I don't think they received liquid waste via tank cars so unfortunately this will not result in an additional destination for them.

There are other interesting scenes that can be modeled too. Right across the tracks from Norlite and separated by a row of trees is an apartment complex. Between Norlite and Keis is a huge, probably man-made water retention pond. I like ponds, but this one wont have any boats, docks, and swimmers. And, just south of Keis, between it and Route 7, there is even a preserved Erie Canal lock which now looks a bit out of place.

Posted by DandHColonieMain at 9:38 AM