One of the biggest reasons I model 1984 is because of the colorful boxcars that roamed the railroads as a result of the "Per Diem" regulations from the late 1970s. Nothing says Delaware and Hudson more than the "I love NY" boxcars. Maybe it is my New York pride, or the sharp blue and white slash paint scheme, or large red heart on the side. I don't know exactly, but they sure are striking.

The early 1980s were tough times for the D&H. New York shippers needed clean, serviceable boxcars to haul their products but there was a shortage of 50' boxcars on the D&H. The D&H was going through financial troubles and didn't have the funds to purchase more boxcars. Bankruptcy was on the horizon and the D&H's Oneonta car shop employees faced potential layoffs because of a lack of work. In 1981 New York State decided to step in and address all of these issues at once, initiating a program whereby NYSDOT would fund the rehabilitation of 200 used boxcars by D&H's Oneonta shop for use on the D&H system (by NYS shippers) and NYSDOT would hold title to the cars.

New York State's Department of Transportation has canceled its boxcar leasing agreement with Delaware & Hudson Railroad. [...] The department got into the boxcar leasing business in 1981 when it purchased 165 Class A 50-foot boxcars from D&H, said Dennison P. Cottrell, DOT supervisor of local assistance programs. 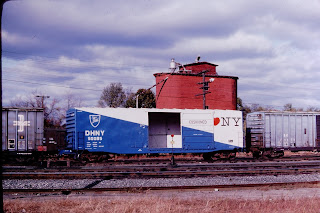 The cars were repaired, then leased back to D&H, he said. At the time, much of the United States suffered from a shortage of boxcars and the DOT wanted to ensure shippers in the Empire State had an adequate supply of boxcars, he said. The DOT paid about $10,000 for each railcar in the deal, which was also designed to provide a quick source of revenue to cash-starved D&H at the time, Mr. Cottrell said. [...] A Guilford source said even though the DOT boxcars were 50 feet long, their carrying capacity was 150,000 pounds, about 4,000 pounds less than other 50-footers. [...] Those cars were too light for some shippers, like printing paper companies, the source said. Some shippers would simply outright refuse to load on them.

There were four different variations on how the cars were decorated during the six years of the program. Originally, the first twenty cars (#50000-50019) had a round black and gold NYSDOT emblem on the right-hand side. Next, they added the "Operation Lifesaver" insignia but couldn't decide on the color. The first ten (#50020-50029) were black, and pictures of these are rare. The remaining cars (#20030-20164) were supposed to have green artwork but for unknown reasons only about half of them received it, with the other half getting nothing. As the program was partially administered by the State, some of the decision making could be blamed on that I guess. For some reason, finding slides of the cars with the black "Operation Lifesaver" took the longest to find. I don't know if there were fewer of those cars. 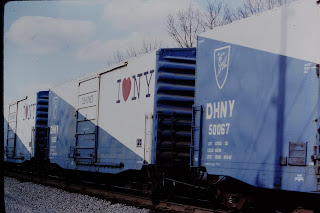 The cars traveled throughout New York and elsewhere. However, by the late 1980s the cars were over 20 years old and worn out. There also wasn't a great need for boxcars in general anymore, leading to a surplus. As a result, during the D&H bankruptcy proceedings (from 1988 through 1991) the bankruptcy Trustee sold the cars individually by sealed ballot. Two large buyers included the Bangor & Aroostook Railroad (which refurbished them again for paper service) and the Naporano Iron & Metal scrap dealer. For the later cars, NYSDOT received $2,837.51 from the sale of each car and the D&H estate total received $561,828.00. One artist is selling pictures of the cars lined up for scrap.

Some history of the cars as well as instructions on how to modify HO models from the time (which is a bit dated now) and paint them can be found in Jeff English's excellent paint shop article in the February 1997 Model Railroader magazine.

Posted by DandHColonieMain at 4:35 AM