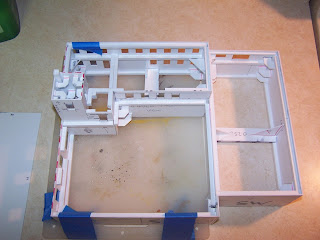 This building has been slowly progressing and along the way I am learning quite a few lessons. The first of which is one should never take on such an ambitious project unless he is willing to swallow his pride and make some mistakes. So far, I have been pretty lucky in the regard but as I was working on one of the walls I noticed a slight rock in the building. That could only mean one of two things: either my work bench is warped or my building is. Tragically, it was the building.

The same wall I tried to cut and repair before was again at fault, and I have no idea how I messed it up again. So, I cut apart the fix I did before, again reset it on a flat surface while using blue tape to prevent it from shifting, and then applied styrene patches. It is now flat. 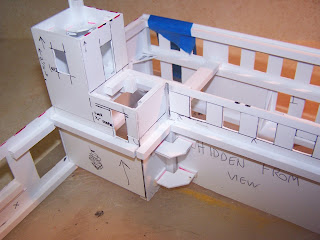 I have also finished the roof areas and the complex inner walls. The roof supports are strips of 1/4" square styrene and I have come to learn that they are not always perfectly flat. During the extrusion process, sometimes a gentle bend is formed and these have to be accounted for when using it. Not all pieces have them, but those that do require extra clamping. I didn't notice the bend in one of my pieces and have had to correct this with extra bracing.

Setting the height of the roof braces has proved difficult too. Ideally, it would be measured from the bottom up but some of the bottom edges are not perfectly flat (which will be corrected during the sheathing of the brick sheets) and some of the top edges are likewise not perfectly flat. I can correct this with thin 0.060" thick strips but until I do I cannot use the top lines as reference points. Since there are three distinct areas for the roofs, and only one is a perfect rectangle, there are so many reference lines that it is nearly impossible to guarantee the roof will be perfectly flat on first go. Interior bracing has complicated matters. 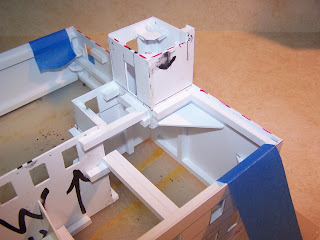 So, I glued the 1/4" square strips along the proposed roof lines and left blanks where windows might interfere. Before the roofs are installed, I will purchase some 0.005" styrene strips and use them and a miniature bubble level to shim the roof up or down. Who knows, perhaps real roofs are pitched at an angle too?

Another issue is that the roofline and details have changed over the past 50 years. The picture in the book from 1963 shows interior sheds and windows and doors that don't exist today. And, unless I get on the actual roof to take measurements (which likely isn't possible) all I have are satellite photos to rely in. They are better than nothing, but not perfect. 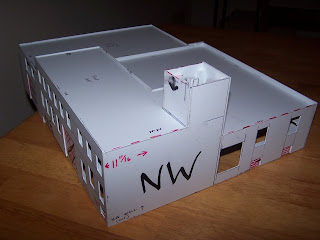 Still, the pictures show where I am now. I am nearly at the point where order of operations will matter. Do I build the windows and doors next and set them flush in the window and door frames? Do I cover the outsides of the building with the brick sheets? Do I permanently glue down the roofs now, which will add rigidity to the building but make it difficult to install the windows later? On the roofs, do I install the brick sheets on the inside lip of the roofs now or wait until the roof itself is glued in? And that doesn't take into account the detailed interior. 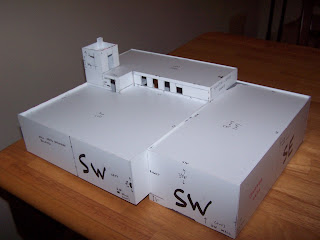 With these tough choices ahead, I am going to think it over for a while. In the meantime, I will experiment using various glues to mount the brick sheet on plastic styrene. To do this, I will build a small styrene box and practice my cutting and bonding methods so that the corner joints look decent.

I already have about 15 hours into the project, with 2-3 spent on photographing and online photo research, 3 hours spent making the drawings, and about 9 hours building what I have already. I mostly work in spurts of about 60-90 minutes at a time, then go and do something else to clear my head. Sometimes, I just stare at it and wonder "what is the next step?" and wait for the answer to come to me.


And yet I still have so much to do!
Posted by DandHColonieMain at 9:28 AM